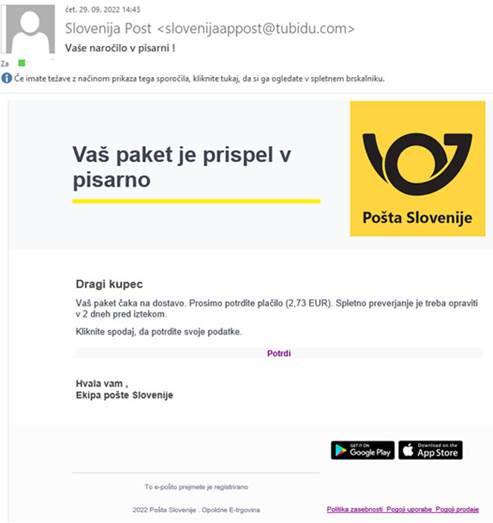 At first glance, the fake messages look like they were sent by Pošta Slovenije

Recently, Pošta Slovenije has again detected an increase in the volume of fake electronic messages containing a notification about the arrival of a package for which a small amount of postage must be paid. It’s a scam.

At first glance, fake e-mails look like they were sent by Pošta Slovenije, as they contain the logos and name of Pošta Slovenije. But they warn that it is about you phishing a scam with which fraudsters try to obtain payment card information and harm the recipient of an email. Pošta Slovenije therefore advises people to be especially careful in times of increased online shopping. Such scams cannot be prevented, and the most effective method is to raise awareness so that the recipients themselves recognize fake messages and do not fall for such scams, they wrote.

The increase in these types of fake messages is observed especially during times of increased shopping, such as the time of pre-Christmas shopping. The e-mail contains a link to a fake website where delivery costs can only be paid by credit card. The website is fake and equipped with Post Office logos, as this is how fraudsters mislead the recipient. If the latter enters the required data from the payment card, in the next step the perpetrators also request a confirmation code, which the recipients received from the bank and with which they confirm the transaction. With this, they unknowingly confirm the transaction, which is generally significantly higher, even around one hundred euros or even up to the limit allowed by the card.

The post office says that they are working to limit this type of fraud when it comes to the misuse of their overall graphic image, and they are also cooperating with SI-CERT and the police. But cybercriminals quickly move fake websites to other domains, and fake messages are sent from a multitude of anonymous e-mail addresses.

Football has truly become a global sportFifa president Gianni Infantino is impressed with how the World Cup has gone so far. He rated...
Previous article
Maduro and Venezuelan opposition to resume talks on Friday
Next article
They study the distribution of the tax burden by gender