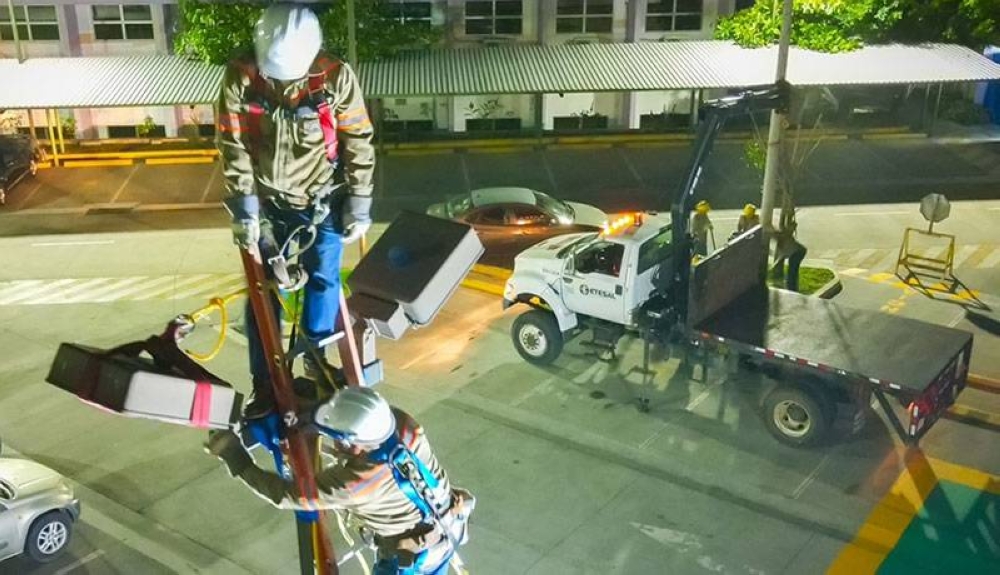 A worker at the new Cuscatlán Energy Distributor. / courtesy

The government created the first public distribution company called Cuscatlán.
With no official notice or investment information, the energy market’s new contender announced the start of operations last Friday with a tweet that included an emoji and said, “Hello.” This publication was reproduced by Lempa Hydroelectricity Executive Committee (CEL) and other subsidiaries such as INE and state newspapers.

Cuscatlan plans to operate in Santa Tecla, Santa Elena (including Plan de la Laguna), Ciudad Merliot and some municipalities of Zaragoza, according to a Twitter account.

In her first publication, Cuscatlán noted that she worked on the relocation of poles and lights at the National Women’s Hospital, where the health center’s heliport will be rebuilt. The photo shows a vehicle technician who belongs to the El Salvador Transmission Company (Etesal), part of the CEL conglomerate.

Eight agents are active in the El Salvador market. CAESS, CLESA, EEO, and Deusem are part of the US company AES, and DelSur is a subsidiary of Colombia’s Grupo EPM. Edesar, B&D and Abruzzo are the capitals of El Salvador.

AES is a major player in this segment as it has energy solutions and power generation units in addition to its energy trading business. It covers 1.4 million customers, 70% of the market. Among its portfolio is his CAESS, El Salvador’s oldest distributor founded in 1890.

DelSur is the second largest competitor in the market, covering over 472,000 users and serving 79 municipalities in central and southern El Salvador.

In November 2022, CEL also announced the construction of its first photovoltaic plant, Tarnique in La Libertad, managed by its subsidiary INE.

At 9:30 a.m., the second semi-final of the Australian Open Championship will begin in Melbourne, in which Serbian ace Novak Djokovic and American Tommy...
Previous article
Biden declares catastrophe in California
Next article
Carlsen is the star of even the fastest chess versions