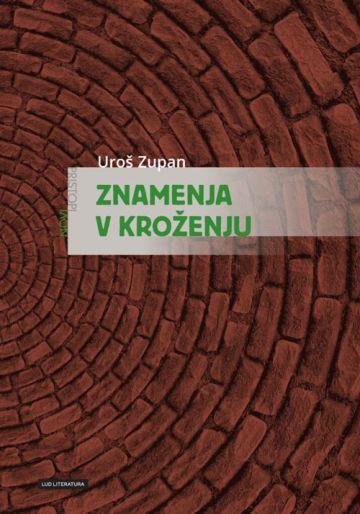 The collection is similar to Zupan’s debut as an essayist in terms of its fervor and some of the already published essays The light inside the orange from 1996.

Collection Signs in circulation after the introduction, it begins with an essay about France Prešeren, after which it continues with essays about Josip Murno, Good luck Kosovel, Edvard Kocbek, Bož Vodušek, Danet Zajc, Gregor Strniša, Tomaž Šalamun, Tomaž Pengov, Milan Jesih, Jure Potokar, Milan Vincetic, Aleš Debeljak, Branet Bitenac and Uroš Zupan. The selection of poets is more or less not surprising, as far as we can connect the author’s enthusiasm for poetry and already known insights and concerns about it. Both are key here – Uroš Zupan skilfully guides us through his own perception, feeling and also analysis of individual songs. In the discussed essays, he relies on a specific poem of individual poets – quoting, interpreting and critically commenting on it. These comments are not only related to poetry, its reactions and systematization, but also critically shake up time and, for example, the curriculum.

Here, it is important that the titles of the individual essays are important. With them, the essayist emphasizes his own attitude or his general attitude towards the analyzed poet and the outstanding poem. It’s so hard to miss the title The poet as a myth, in which, among other things, he problematizes the analyzes of Srečko Kosovel. Zupan gives the impression that he feels poetry more than he theorizes about it or systematizes it, but the insights are precise and weighty. In any case, we should not leave out the constant feeling that is so well known by the Zupans from their earlier essay collections and is among his best elements. This small percolation of the atmosphere in the essays is interwoven interpretatively with poetry, and not so much with the introduction of one’s own nostalgia. For example in the essay about Kocbek he writes: “In this poetry, the reader is exposed to earth and matter, exposed to winds, silences and charms.” But this is even more apparent in the essays on Strniša and Zajec, which, according to the analysis of the poetry, are the umbrella in the entire work.

The author most skilfully analyzes the poets with whom he had a personal relationship. Knowing the author, common anecdotes, performances and at the same time analyzing the songs are the best elements of these essays, the structure itself is well thought out, for example the essays on Aleš Debeljak and Tomaž Šalamun. Everything is in the right place. Some already published essays were supplemented by Zupan. These specially highlighted annotations indicate additional explanations, new insights.

Uroš Zupan does not leave out either knowledge or analysis of interpersonal relationships. This display shows us that everyone is made of flesh and blood, no matter who they are or what they wrote. And how good. Although some statements are painful, the author exposed the poets directly to us.

Signs in Circulation is an important essay work. They are incisions in poetry, whereby Uroš Zupan chose not only the right content, but also the prescribed method.