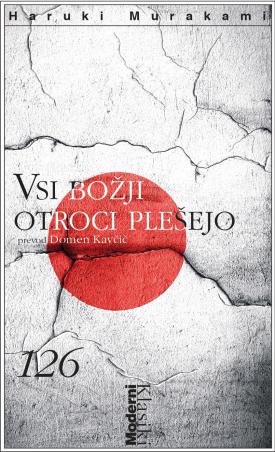 The third of Ian Fleming’s series of novels about the secret agent James Bond has everything, writes Marcel Štefančič: “the fear of the atomic bomb and fascism, the book is a brilliant analysis of all the dysfunctions of modern capitalism”.

The story of the novel Moonrakerwhich, according to Štefančič, remained completely unused in the Bond film franchise, is one of the three novelties of the Modern Classics collection of Cankarjevo Zalozba.

In addition to the book about James Bond, these are two novels by contemporary French author Marie NDiaye with the title Revenge is mine and a collection of short stories All God’s children dance Japanese writer Haruki Murakami.

According to the editor Aljoša Harlamova the common thread of all the texts in Murakami’s book is the catastrophic earthquake in the city of Kobe in 1995, in which 6,400 people died. The earthquake does not directly affect the protagonists of the stories, but for all of them it represents a turning point in their so far, average everyday lives.

He outsourced the work Domain Kavčičwho says that short stories are the exact opposite of Murakami’s novel The killing of the commander, which he also translated. The novel spans a thousand pages and, like most of Murakami’s works, has a first-person narrator. The six short stories, however, have six different third-person narrators. Among them are also female characters, which is also not typical for the writer. The protagonists of the stories are very different from each other and the stories themselves are quite diverse in style, so translating was quite a challenge. Kavčič described Murakami’s collection as one of the author’s better works. Jožica Grgič contributed the foreword.

Gilles Principaux hires lawyer Susane to defend his wife who killed their three children. However, the narrative is not concerned with the crime, but focuses on the uncertain memory of the lawyer, who vaguely recognizes in the man a person from a central, anxious, but almost completely repressed event from her childhood.

According to Suzana Koncut, the secret of what really happened and whose revenge is announced in the title will not be revealed. Mysteriousness in the novel is built on the fact that we never leave the narrative line of the lawyer, who narrates her impressions and explanations in such a way that it is not clear when reality is unfolding before us, and what is imagination.

The book of the momentFleming’s novel Moonraker, which was published in 1955, the foreword writer Marcel Štefančič described as “the book of the moment”. It tells the story of businessman Hugo Drax, who builds a spaceship to defend England. However, Drax is actually working for the Soviet Union and the Moonraker, a marvel of engineering that is supposed to cause a nuclear explosion in London, and for Drax, this disaster would also bring him profits in the stock market. Uncharacteristically for Fleming’s writing, the entire novel takes place in England and accurately reflects the fears of the bloc conflicts during the Cold War.

Fleming’s clean, flowing and readable styleAccording to Štefančič, the novel has nothing in common with the 1979 film (Space Operation), the story of the novel, which is brilliant, remained completely unused in the Bond film series. The translation is signed by Maja Novak, who characterized Fleming’s style as refined, fluent and easy to read, which definitely ranks him among modern classics.

Havertz: We deserve to go home!Until the World Cup in Russia in 2018, Germany had never finished their performances after qualifying. Now this...
Previous article
Putin’s Referendum in Ukraine: A Show of Strength That Betrays Weakness?
Next article
The Himalayas took the life of the famous American alpinist Hilaree Nelson