“Such presentation of artists is unacceptable, discriminatory and therefore inadmissible” 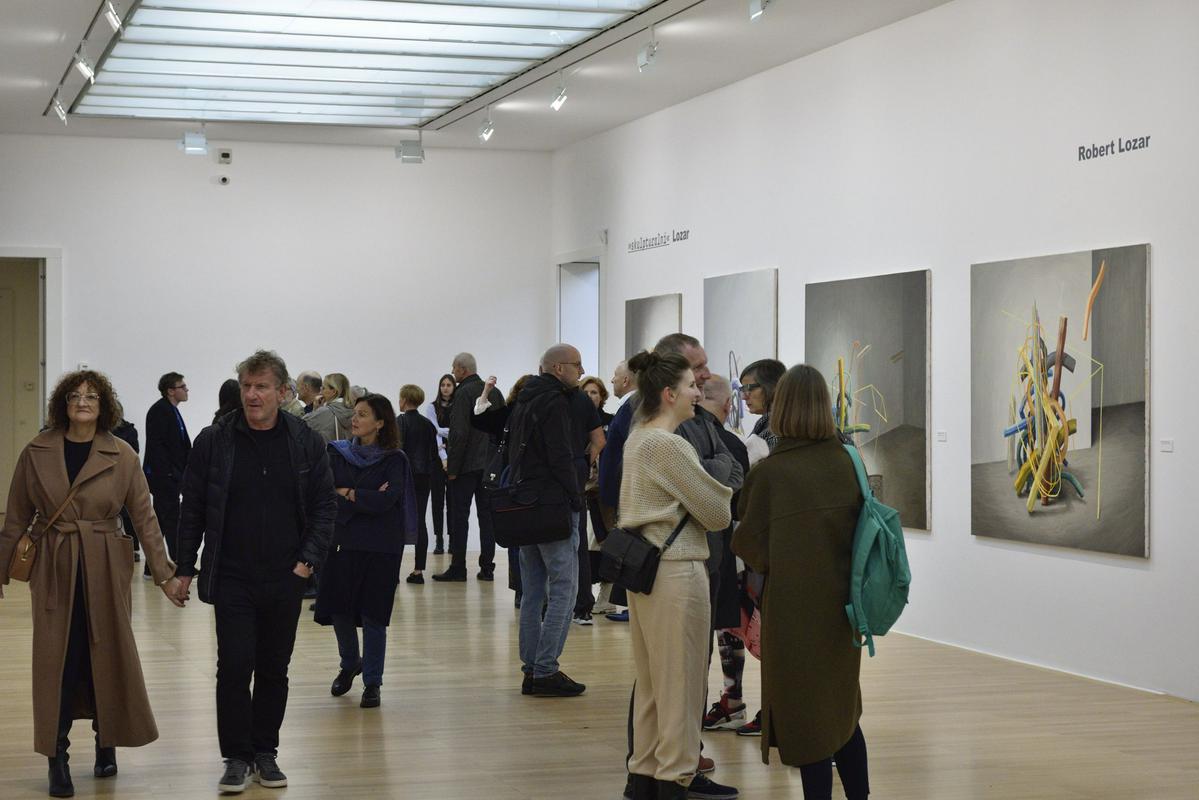 Andrej Medved announced that all his inscriptions next to the artists’ works were removed. It lacks a professional evaluation of the exhibition.

In a statement to the public, the experts of the Modern Gallery distanced themselves from the exhibition Momental-mente: living paintings, which was opened in the gallery last week.

The appointment of the external curator dr. Andrej Medved they complain that it represents an unacceptable practice of conveying knowledge, presenting and interpreting art, for which the Modern Gallery is competent and responsible according to its statute. As Medved said, he wanted to introduce playfulness into the signs that are criticized. According to him, the inscriptions have already been removed.

They find the method problematic “interventions-presentations of the works of artists at the exhibition” and not because we would like to argue with the curator’s selection of artists and their works. As they write, the curator is “autonomous here, even if each exhibition can be discussed, it is easier if one is invited to do so.”, and the professionals of the Modern Gallery were not familiar with it during the preparations for the exhibition, they were able to see it for the first time at the opening. In the introduction, they also explained that they were opposed to the very inclusion of this exhibition in the exhibition program of the Modern Gallery.

The presentation itself is criticized for the inscriptions, which “we assume with adjectives to indicate the nature of the work of the individual author, for example Romantic Čepin, Miraculous Jakše or Tsvetoča zvejd mlada Joni”. They think so “the practice of mediating art in the modern museum in modern times has gone beyond this kind of simplified and one-dimensional intellectually patronizing reduction of paintings to authors and viewers to a kind of supposedly light, apparently playful, but in fact banal adjective; this corresponds rather to the practices of marketing, commodification of the name and of a work of art, which every serious museum, with a study and critical attitude towards both the object of its study and the contemporary ideological-political context of thinking about art, must resolutely resist”.

They are convinced that he has “such a simple interpretation of contemporary artistic practices has more far-reaching implications for thinking about art than it might seem at first sight: it returns it to the conservative field of private pleasure and thus limits its wider cultural or social relevance in general”. They also find it controversial to deal with the past work of the museum where the curator is a guest. In the introductory text of the exhibition, it is written that the central national exhibition center is to blame for the decades-long suppression of the painters’ trade.

An even more worrisome aspect of written labels is discrimination on the basis of gender. “While the authors in these ‘creative’ descriptions are listed with their last names, the female authors are listed only with their first names (but not all of them – some do not have such a description at all, and one is listed with a first and last name). This is how they are displayed in the Modern Gallery” Blooming always young Joni”, “Nika’s deep blue” and “Inventive inventive Suzana” in addition to male colleagues who are worth calling with surnames, “(The un)repeatable A. Kobal”, “Sculptural Lozar”, etc.; such a method of strengthening inequality is also continued in the handouts intended for visitors. We consider that such a decision to present female and male artists in the central national museum for fine and visual arts is completely unacceptable, discriminatory and therefore inadmissible. The museum must be a place of inclusion and equality, and such reckless moves , which reveal a complete insensitivity to social issues, must not be allowed,” they write.

“Critical sensitivity to pressing socio-political topics and ideologies that also cross the field of art and culture has always been a key guide in the work of the professionals in the Moderna galerija, therefore, from this kind of ‘unbearable ease’ of addressing and exhibiting, as shown in the exhibition Momentalmente: living images, we resolutely distance ourselves,” the signatories of the letter, dr. Martin Vovkdr. Marko JenkoM.Sc. Adela Zeleznikdr. Bojana Piškur, Igor Spanjol, Lucia Cvjetkovid, Ana Mizerit, Dejan Habicht, Sabina Povšič, Teja Merhar and Jana Intihar Ferjan.

The signs next to the works have already been removedCurator Andrej Medved said that all his inscriptions next to the artists’ works were removed because the artists themselves had complained about some of them. Staš Kleindienst said that he did not recognize himself in the description, that he was a romantic painter, Miha Štrukelj but not eloquent in description.

Medved misses the professional evaluation of the exhibitionTo the criticism that he used the practice of mediation of art, which in the modern museum in modern times went beyond this kind of simplified and one-dimensional, intellectually patronizing reduction of works of art to authors and viewers to a banal adjective, he replied that it was in no way a matter of patronage, even less for banality. Regarding the one-dimensionality, he said that the curator’s selection is always a one-way understanding, if or until the artist gives a response. What Medved is missing is a professional evaluation of the exhibition, which would be done by the Modern Gallery’s expert colleagues.

As he explained, he wanted to introduce playfulness into the inscriptions, which is otherwise not the usual practice of serious exhibitions. “And this playfulness drew in the names of male and female painters, but without any pretentiousness or purposeful gender selection. It was a pure play on words,” he explained.

Medved: With a few exceptions, the Modern Gallery has not presented contemporary painters in recent yearsThe fact that Moderna galerija has not represented contemporary painters in recent years with a few exceptions, such as, for example Gabriel Stupica, Arjan Review and Bullet Krašovec, according to Medved, it is a fact. As he said, there were some retrospectives to present the contemporary production of young painters, but he doesn’t remember. He only mentioned the 2019 exhibition as an exception A time without innocence. Recent painting in Sloveniaprepared by curator Martina Vovk.

Previous article
Lula vs. Bolsonaro: A duel with an uncertain outcome in the midst of a divided Brazil
Next article
Chile shines with boats!Niemeyer and Abraham sisters win gold at the Odeseur