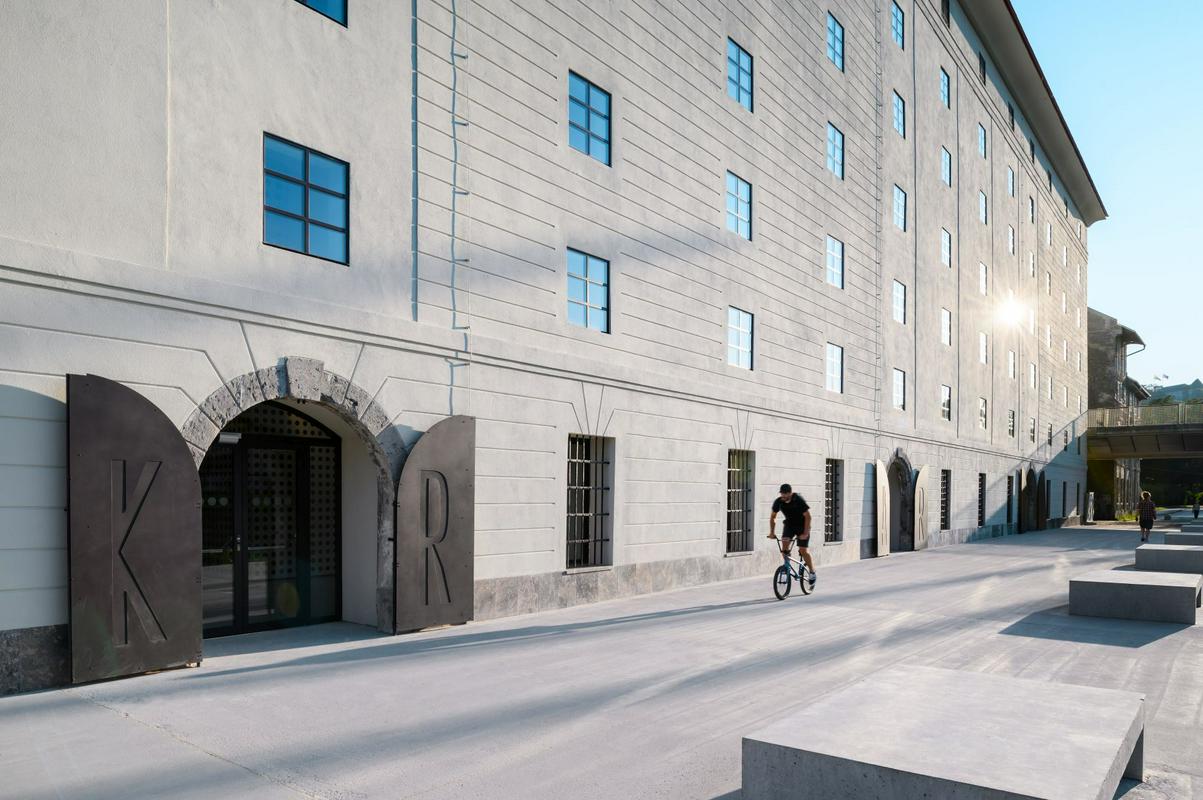 The Golden Pencil for excellent execution, awarded by the Chamber of Architecture and Space of Slovenia, is awarded to the authors of Galerija Cukrarna, MM House, Pedenjped Kindergarten and Podvrh House. The patinated pencil is the Franciscan Chapel on Prešeren square in Ljubljana.

The platinum pencil, which is awarded to a Zapsa member for a larger work in the field of architecture, landscape architecture or spatial planning, is awarded to dr. Maja Simonetti and Lena and M.Sc. Tomaž Krušecand they were chosen as honorary members of Zapsa Nina and Matevž Granda.

The awards will be presented at the Architects’ Days on Friday at 6:30 p.m. in the Museum of Architecture and Design at Fužina Castle.

As stated in the justification, Maja Simoneti, with her extremely diverse and high-quality oeuvre, which covers all levels of spatial arrangement as well as various professional fields, represents one of the most important professional figures in Slovenian landscape architecture and spatial planning. “Her list of professional accomplishments is long and impressive, and she demonstrates a highly professional and creative approach in a wide variety of fields.”

For Lena and Tomaž Kuštrec, we read in the justification that, since they appeared on the Slovenian architectural scene, with their colleagues, among whom Vid Kurinčič should be highlighted in particular, “created an extensive opus of important architectural works that belong to the highest quality of modern Slovenian architecture. Their work includes built buildings and projects that ennoble and expand Slovenian architectural culture. They are characterized by a calm, quiet and unobtrusive architectural language that combines tradition and modernity, restraint and monumentality, but above all a commitment to architecture as the art of space.”

They are members of the Platinum Commission Mihael Desmandr. Bullet Sitar and M.Sc. Ina Šuklje Erjavec. Nina and Matevž Granda became honorary members. “architects who are known among their colleagues primarily for publishing”. Most reluctantly as the founder of Outsider magazine. “The magazine was founded in 2015, at a time when there was already a general belief about the imminent decline of classic print media, and few people predicted a bright future for their project. But Outsider has not only survived in seven years, but has become one of the most relevant spaces of architectural discourse here, but also a platform for architectural activism, the discovery of new perspectives and the removal of old, forgotten ones for the exploration of new architectural practices and materials, and in the last year even the opening of new public spaces,” is written in the rationale.

This year, the committee for the Golden Pencil awards awarded awards to four excellent architectural works, reports Zaps. When selecting the best architectural solutions, the commission was guided by the idea of ​​freedom of architecture, and with this they wanted to emphasize the fact that good architecture cannot be reduced to a single, predetermined system of thinking and action, which should guarantee us a successful job. “Architecture is a mental and material activity that is constantly being redefined. In order to label a building as successful or unsuccessful in architecture, it is necessary to evaluate each building separately and every time,” they wrote down.

Sugar shop, an object that does not leave the visitor indifferentSo they awarded two individual houses and two public buildings. Confectionery signed by co-authors Marko Studen, Boris Matic and Jernej Šipošaccording to the commission, the reconstruction of the former sugar refinery is extremely demanding and successfully realized. “On the outside, a massive building with an easily relaxed but monumental interior does not leave the visitor indifferent. In addition to the fact that Cukrarna has become Ljubljana’s new cultural center of contemporary art, this building plays an important role as the guardian of all-Slovenian, historical memory. The concept of the design of the space confidently follows the idea that “ they wrote down.

Kindergarten architecture that opens the door to a new, fresh design approachKindergarten Pedenjped – Uchenjak unit (co-authors are Denis Rovan, Aleš Žmavc, Matic Skarabot, Lev Rahovsky Shuligoi, Vesna Draksler, Nina Vidić Ivančič and Lara Gligić) is an excellent example of energy rehabilitation of an existing kindergarten with a new extension, according to the commission. “The authors succeeded in an extremely difficult task, how to create architecture from the given task, not just a renovated building, and in this process be constantly pragmatic enough with the awareness that it is a kindergarten where resources are limited. In all respects, a successful combination of old and new work of the kindergarten and exceptional attention to the design of the interior and the ambiance of the children’s playground raises this architecture to the highest level. The architecture of this kindergarten opens the door to a new, fresh design approach and cuts into the generally accepted aesthetics of Slovenian architecture.”

A house so complete and final that it cannot withstand changeHouse MM or they designed the renovation of an old country house in Domžale Žiga Ravnikarand Klara Bohinc and Andraž Keršič. It is an “exceptional example of consistently designed and executed architecture: in concept, harmonious fusion of old and new, and attention to detail. The authors created an almost mystical atmosphere in the house by modulating space and light, with proportions and with materiality. This house is so complete and definitive , that it cannot withstand change; not in its exterior, not in its interior. It is designed as a perfect world with its own rules that the user must accept. But when he accepts them, the house welcomes him into its sensual embrace.”

Perfectly solved micro-urbanismHouse Podvrh co-authors Bora Pungerčič and Petre Stojsavljević together with the renovated hayloft and garden, it forms a perfectly resolved micro-urbanism. “The building is designed as an open composition; both urbanistically/architecturally and also in the guts of the interior. The space responds to the needs of the users, allowing for changes in the purpose of the rooms and the free change of furniture. The details are resolved pragmatically but consistently, and the materials are used according to function and price In the house and in the garden, the authors managed to create many micro-ambients with different views, atmospheres and varying degrees of openness, qualities that create a unique charm in this house,” is also written in the justification.

After demolition, disrespectful renovation is the biggest threat to quality architectureThe winner of the patina pencil Franciscan Chapel on Prešeren Square in Ljubljana by the author Maruše Zorec in a way, it is a recognition of the quality aging of architecture, which actually no longer exists. The chapel therefore aged gracefully, even if it was subsequently destroyed, the commission is convinced, adding that we must distinguish between aging and destruction. The site of the chapel is currently in the process of being “renovated” into a new space with a new program, past the author of the original architecture. “This “renovation”, like the still current danger with the loss of Plečnik’s stadium, confirms that inadequate and disrespectful renovation immediately after demolition is the biggest threat to quality architecture. However, the almost erased chapel is a project that, even in its posthumous phase, raises questions about quality , duration and even the very definition of architecture. The first independently realized work of the architect Maruša Zorec was relatively unnoticed in the noisy, loud and transitional nineties: on perhaps the most noisy, loud and transitory square in Ljubljana, it established a restrained space of individual contemplation that respected the venerable deposits of the past around her, but at the same time she confidently announced her own path as an author who in the following decades became one of the most respected European architects of renovations and the establishment of a modern attitude to heritage.” writes the commission.

The awardee was chosen by a committee consisting of Rok Jereb, Tomaž Ebenšpanger, Ana Kosi, Sergej Hiti and Miloš Kosec.

Shock of the night: first Phoenix lost to last HoustonBoston entered the game with Miami riding a 10-game winning streak at TD Garden, and...
Previous article
Microbiologist: With the new versions, rapid tests are still reliable
Next article
The budget deficit has not significantly increased in the last nine months