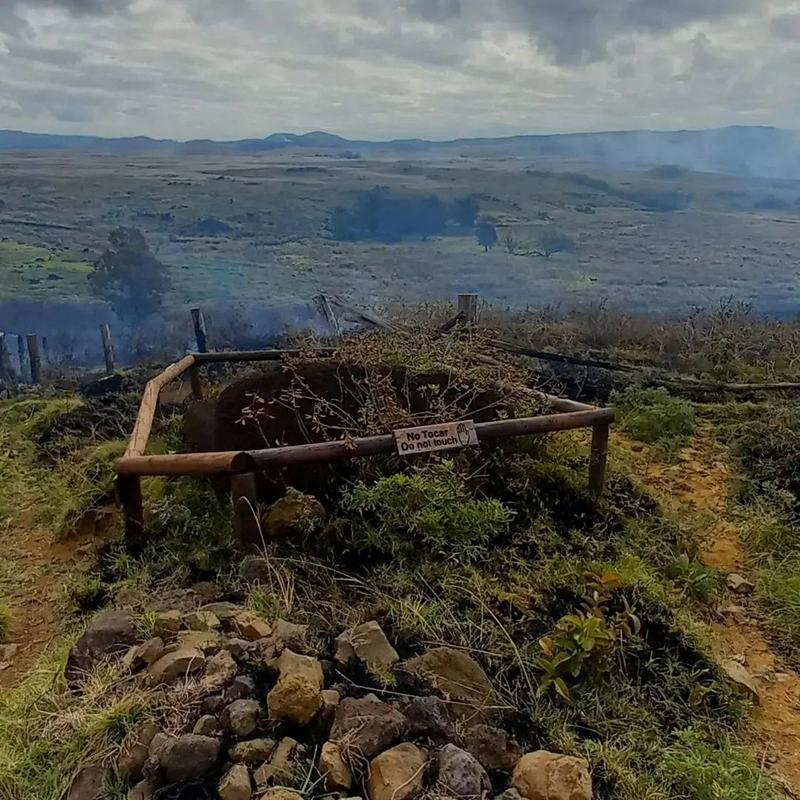 According to local authorities, the fire was most likely started by a person

A large-scale fire that broke out on Easter Island damaged several famous statues called moai, which have been listed as a World Heritage Site for decades due to their uniqueness.

The fire that broke out on the Polynesian island with the original name of Rapa Nui on Monday spread to about 100 hectares, and the area around the extinguished Rano Raraku volcano, where most of the 1,000 or so famous stone statues on the island stood, was the most affected. Many of them are minimally burned, but several have “irreparable consequences”, announced the mayor of the island Pedro Edmunds Paoa.

“More than 100 hectares in the Rana Raraka area, which includes both the swamp and the moai area, are affected,” they wrote in a press statement in the national park, according to the Guardian newspaper.

The famous monoliths, which measure around 10 meters and weigh more than 70 tons, are mostly carved from tuff (solidified volcanic ash). They were created between 1100 and 1680 and are considered a unique cultural heritage of the original inhabitants of this isolated island. Since 1995, they have been included in the UNESCO list of cultural heritage, and the area where they stand is also a national park, which is now closed.

The conservation of the statues and the functioning of the national park is ensured by the community of Ma’u Henua, its representative, Ariki Tepano, however, he wrote on social networks that the damage after the fire was “irreparable” and that “the consequences are much worse than what can be seen with the eye”. “The moai are completely burnt,” he also wrote according to the BBC. According to the Guardian, Pedro Edmunds Paoa added that the statues will most likely not be restored: “Cracks on such a stone cannot be repaired, no matter how many millions of euros or dollars you invest.”

In addition to the damage caused to cultural heritage, the event also has potential economic consequences. Easter Island, which lies about 3,500 kilometers from the coast of Chile, and the nearest other inhabited island is Pitcairn, which is more than 2,000 kilometers away, lives mainly from tourism – which is encouraged by the aforementioned monoliths.

After the covid-19 pandemic, the island was completely closed for two years, and it opened to tourists only recently, on August 5. Before the pandemic, it was visited by around 160,000 people a year, and the island was connected to Chile by regular daily flights.

It is not yet known exactly why the fire broke out, but the mayor of Easter Island told local radio that “it was probably not an accident” and that “all fires on Rapa Nui Island are caused by people”.