“A person has a choice, to become a puppet or a rebel”: premieres of plays on the theme of gender and sexuality in Glej 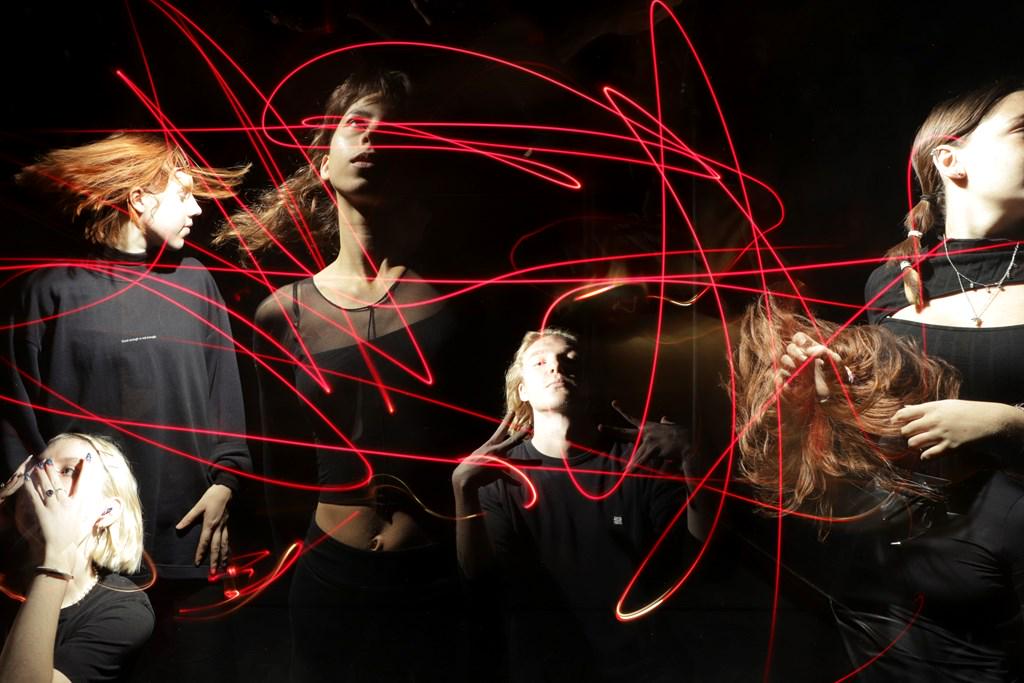 As part of the Generation to Generation festival, the Glej Glej theater presents two Glej premieres, Come such a day, come such a year, come the spider and Infratanka, as well as a guest play #HOTDONKI by students of the 1st Grammar School Maribor.

In the 2022/2023 season, Glej is the host of the new international FuN project! (Future is NOW! A Youth Manifesto), which connects Czech, Dutch and Slovenian theater in efforts to produce youth plays and develop inclusive methodologies for working with young people in theatre.

In FunU!, a program co-financed by the European Union, Gledališče Glej (Slovenia), Het Stichting Theaterschip (Netherlands) and NDM Ateliér (Czech Republic) join forces. Each of the partners also chose a topic – Glejevi’s is on the topic of “gender” or gender and sexuality, the Dutch prepare on the topic of the environmental crisis, and the Czechs on the topic of social inclusion. Each partner has committed to connect the young generation with mentors in their theaters, who will jointly create performances and highlight topics that are at the center of their concerns and their future, announced Glej.

Today and Friday at the 2nd Generation Generation festivalThe first act of this project will be the premieres of two author’s plays on the topic of gender and sexuality, which were created within the framework of the FuN! project: Such a day comes, such a year comes, a spider comes and Infrathin. The premieres will take place in Glej today and on Friday at the 2nd Generacija Generaciji festival, along with a guest appearance by the students of the 1st Grammar School Maribor and their performance #HOTDONKI.

A day like this comes, a year like this comes, a spider comes is a performative performance by seven young creators. It touches on the topic of social norms regarding gender and how these affect the individual’s subconscious. “A person has a choice, to become a puppet or a rebel, a prisoner of his own thoughts or an outcast of society. Indeed, despite the rapid development of postmodern society, we still have experiences and fears, beliefs and expectations. Free expression is still not a matter for the community when they stare at us eyes of authority,” he writes at the performance. They are authors and performers Lara Čabrian, Katjuša Golobič, Jon Lah, Lota Martinjak, Eva Omahen, Ela Potočnik and Patricia Sekelj. They took over the mentorship Vid Klemenc and Tatjana Peršuh.

“Wait, wait. My dears, where are we going?”“The causes of disorders, mental problems and psychological hardships can also be found in excessive exposure to harmful content. You know, such shallow, trivial content that is full of lies and distorts the real image,” and they begin the content of the play HOT DONKS. “Self-esteem suffers. But they’re ‘nice’. And fun. (Psssst! – this is the card the authors play.) We all read them, spend hours poring over and flipping through the … computer? Wait, wait. Don Quixote flipped through books . And his ‘harmful and cowardly’ models were the knights, the personified honor and the struggle for justice and truth, the personified protection of the weak and the poor.”

“Wait, wait. Kim Kardashian? Cristiano Ronaldo? Donald Trump? Wait, wait. My dears, where are we going?” they ask themselves in the play whose mentor she is Tatjana Peršuh. He is a movement mentor Dušan Teropšič. But they play Jana Bjelobrk, Lena Hebar, Petja Golec Horvat, Špela Kežmah, Lara Mavrič, Jure Senekovich and Stella Pogačić. The producer is the director of the theater school of the First Grammar School in Maribor Tjaša Klanjšček.

The third performance Infrathin however, it focuses on the infinitesimal difference that makes an infinite gap between two perfectly identical objects. “It pushes one beyond the everyday, the routine into something worthy of admiration. How thin is the dividing line between the stage and other parts of the theater? Personal experience and author’s work?” the authors and performers wrote Petruša Urša Koželj, Tina Malenšek, Paulina Pia Rogač and Petja Rozman. They were mentors Anja Pirnat and Primož Bezjak.

GZS is moving forward with a new management teamAt 33.9 points, the index of purchasing managers in Slovenian manufacturing companies is well below the...
Previous article
Kumer: The proposal of the European Commission will have to be specifically corrected
Next article
Scientists discover new coronavirus protein: New treatments may be created