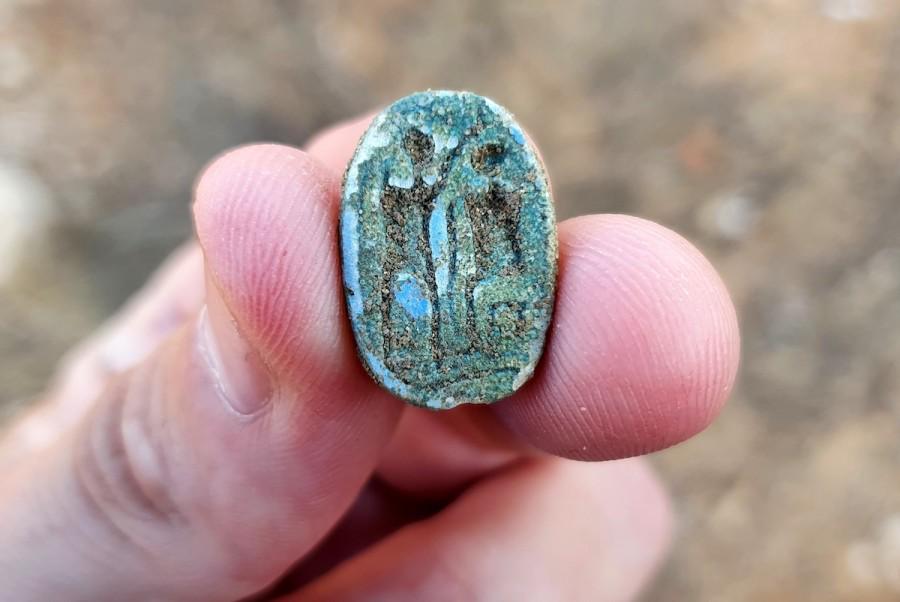 On a school trip to Azor, an Israeli town near coastal Tel Aviv, elementary school students found a more than 3,000-year-old scarab. although the scarab is a distinctly ancient Egyptian symbol, many of them have also been found in Israel over the centuries.

Some of these artifacts were brought from Egypt, while others originated in Israel under strong ancient Egyptian influence.

“We were wandering around when I saw what looked like a small toy on the ground,” he said Gilad Stern from the Israel Antiquities Bureau, who led a school trip to the Azores. He described the event as “every amateur archaeologist’s dream find”.

As Stern said Wednesday, he was amazed when he picked up the blue stone: “It was a scarab with a clearly carved scene.” The students of the 8th grade were delighted with the find, reports the German press agency dpa.

The animal is made of faience, which is a type of light-colored ceramic coated with a lead-tin glaze.

The most recognizable ancient Egyptian amuletA scarab is a type of beetle-shaped amulet that originates from ancient Egypt. The beetle stone was once a seal, but later became a protection and talisman. In ancient Egyptian mythology, the scarab was worshiped as a symbol of the sun, life and rebirth, and was also an image of the sun god Raja. Amulets were placed over the heart of a mummified corpse. They are also depicted in hieroglyphs.

According to the Antiquities Office, the find dates back to the Bronze Age and is coated with a blue-green glaze. Accordingly, the scarab was a “symbol of power and status” and may have been worn on a necklace or ring. The scene depicted on it probably represents the conferment of legitimacy on a local ruler.

Coincidences of historySo far, archaeologists have not worked out how the scarab landed in the Azores near Israel’s Mediterranean coast. “It may have fallen from the hands of an important statesman who was traveling through these parts, or it may have been buried on purpose and skillfully brought to the surface after thousands of years,” speculates Amir Golani of the Israel Antiquities Bureau.

Previous article
The end of a multi-decade project: Golob and Orban officially launched the Cirkovce-Pince transmission line
Next article
What kind of comic is created in collaboration between artificial intelligence, robot and human?