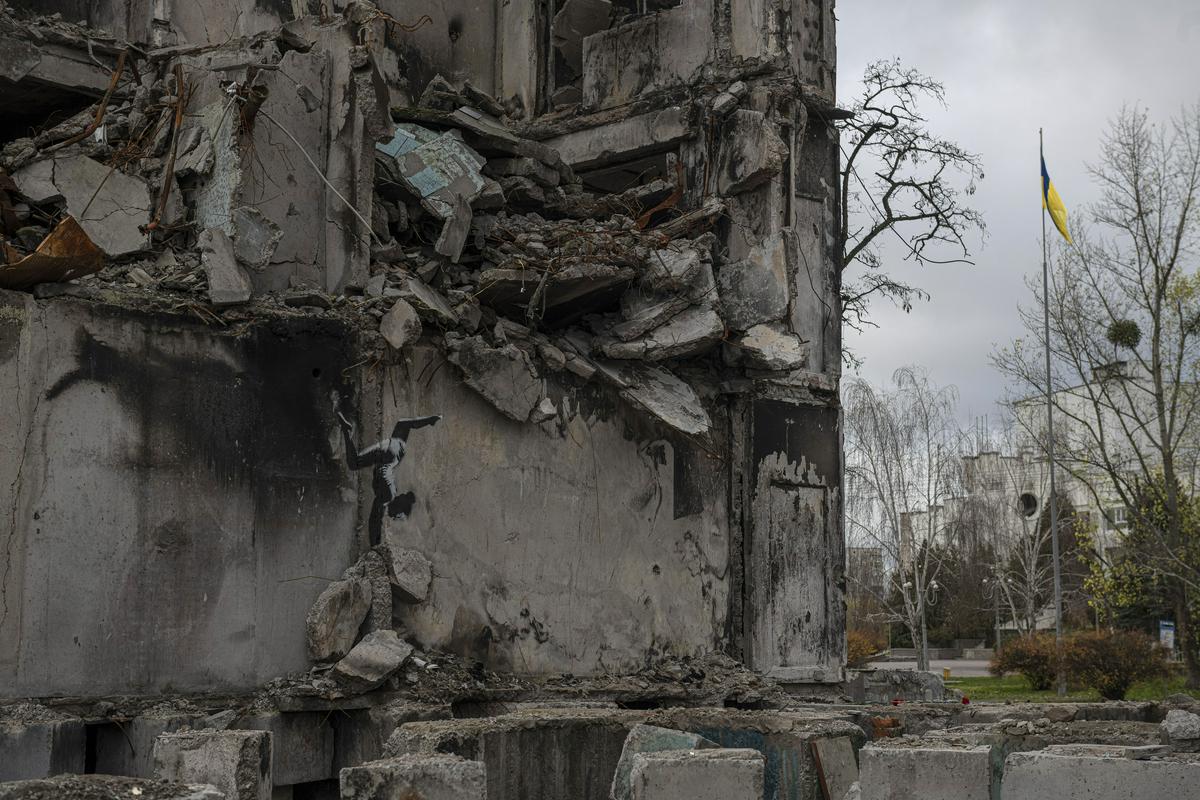 In Ukraine, a public debate is currently taking place around what to do with the seven murals that Banksy left in November on the remains of demolished buildings in and around Kyiv. One was already attempted to be stolen from the wall, which underlined the necessity of protecting artworks.

In December, the police arrested eight people in Hostomel, near Kyiv, who tried to cut a Banksy mural from a building. It was a depiction of a woman in a dressing gown with curlers in her hair, a gas mask on her face and a fire extinguisher in her hands.

The police officers confiscated the creation from the thieves at the scene and took it with them. They were informed about the situation by a suspicious local who asked the thieves what they were doing, but they appeased him with the pretext that they were collaborators of the French charity organization Neo-Eco, which reconstructs Hostomela apartments with recycled materials. The police are still investigating and the mural is kept in their offices.

The state prosecutor said in a public statement on Monday that the alleged organizer of the robbery had already been on the radar of the guardians of the law. He faces up to 12 years in prison. “He intended to sell the art and spend the proceeds as he saw fit,” explained the prosecutor. “He assured his colleagues, who had no idea what was really going on, that he had all the necessary permits to remove the mural.”

He always authenticates his works himselfBanksy created several murals on Ukrainian soil at the end of last year, and after returning from the country, he himself confirmed the authorship with a post on Instagram. (The video showed the anonymous artist at work, as well as conversations with locals.) He placed the murals primarily around heavily damaged areas in the Ukrainian capital.

Who will look after the mutrales in war?The failed theft of the artwork, the value of which was estimated at 9 million Ukrainian hryvnias (a good 231 thousand euros), sparked a debate about what to do with the woman in the dressing gown during the Russian invasion, as well as with other extremely fragile works of art.

Some experts argue that the artworks should remain where Banksy painted them. The problem, of course, is that most of the ruins that served as a “canvas” are slated for disposal. Low winter temperatures and the potential effects of snow must also be taken into account.

The question arises whether the works of art that are still on the walls can be protected during the war, as well as whether it would even be possible to properly display them in the bombarded Kiev. In Kiev, they spend most of the day without electricity or heating.

The Neo-Eco organization has already proposed that at least the already removed mural be sold at auction and the funds used for the renovation of Hostomel. “Banksy is a little ray of sunshine,” the co-founder of Neo-Eco commented to the British Guardian Bart Gruyaert. “It looks at things in a fresh way that is uplifting, not brutal. People see this work as a tribute to their suffering. Art transcends time and will have lasting value.”

The work removed from the wall is currently still in the possession of the police, as it serves as evidence. It is not yet known when the trial will begin. The thieves defend that they wanted to “raise funds for the Ukrainian army” with the sale, and the fact that the artwork technically does not belong to anyone will make their task more difficult for the prosecution.

The final decision on whether the mural will be sold or not will be made by the residents of Hostomel in consultation with the mayor. “It depends on them. In any case, we will respect their decision,” Gruyaert emphasized. Before the thieves took matters into their own hands, the organization had already studied methods of safely removing murals from walls. “They were about a week ahead of us and they solved the problem for us.”

Previous article
Spotify Enables Future Playlists: How to Store Songs in a Time Capsule
Next article
‘Maternity tourism’: why hundreds of Russian women travel to Argentina to give birth