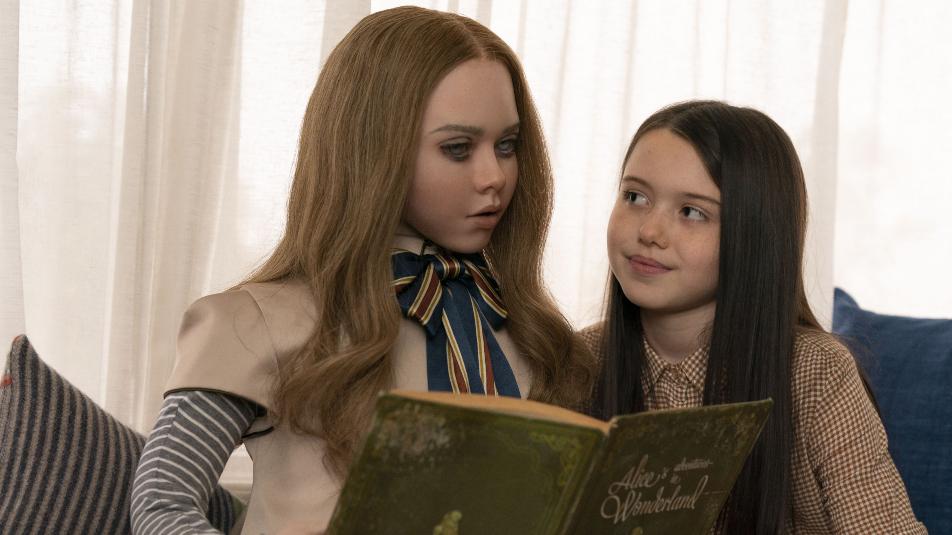 Movie spoofs, little movies within a movie, are a fascinating subgenre. In the horror movie M3gan, such an ad tells us that children are crazy about the Eternal Pets, furry successors of the Furby, decorated with googly eyes, clipped farts and overly realistic teeth.

And it’s not even the scariest toy in the movie. That honor, of course, belongs to the headliner M3gan (her name is short for “Generative Android Model 3”), a doll with which the fictitious company Funki would like to conquer the luxury toy market.

You know all this because the (real) ads for M3gan in recent weeks, it was inevitable: even before its premiere, the film had become a pop culture meme, including the doll’s viral dance and psychopathic dot-types. Can any movie ever live up to the high expectations that come from incredibly successful marketing?

If M3gan – doll a product of meme culture, it is M3gan – the movie deeply rooted in the horror genre. Its producers are indisputable authorities of the genre Jason Blum and James Wanbut it targets the same subgenre campdeliberately absurd horrors like Wan’s recent hit Evil (Malignant, 2021). Of course, it helps that both films have the same screenwriter, Akela Cooper.

The horror genre has a rich tradition of creepy dolls, with Chucky and Annabelle at the forefront, but M3gan it is, at least that’s what the roar in the packed multiplex suggested on Saturday, at least as much comedy as horror. The goal of M3gan is not to traumatize us and creep into our subconscious like Ari Aster’s films – director Gerard Johnstone in a deliberately caricatured way, it satirizes modern parenting, which relies on the crutch of new technologies, and at the same time pays homage to the cinematic tradition of killer dolls and the “surrogate mother” motif, which is also common in this genre (e.g. Mom Andrés Muschietti or A visit M. Night Shyamalan). If Scream 25 years ago, the slasher genre was updated with the introduction of telephones M3gan upgraded the creepy doll archetype so that it is now able to “hack” the Alexa family device.

Reclusive, career-focused Gemma (Alison Williams) is writing code for Funki’s Eternal Pets in his remote lab. On the side, he’s working on a much more ambitious project, an android doll with synthetic skin, which would be so expensive to make that it’s out of the question for mass production anyway, and will most likely never make it past the test phase. One day, fate intervenes cruelly in Gemma’s routine: when her sister and brother-in-law are killed in a car accident, she becomes the overnight guardian of their orphaned daughter, eight-year-old Cady (Ronny Chieng).

It is clear that motherhood is not suitable for Gemma and that she will not easily navigate her new role. This is evidenced by her home, a sterile house with elegant furniture, full of toys in original packaging “that we don’t play with”. In a desperate attempt to connect with his traumatized niece, he shows her his student project, a large and bulky robot prototype that must be operated by hand – but the girl is still fascinated by the machine. Rekindled by Cady’s interest, Gemma spends her spare time completing a prototype of the M3gan, a doll that can “connect” with its underage user and build the most realistic relationship possible, while helping him with his homework and making sure he nothing happens. In short, “the only toy you’ll ever need”.

Gemma, hand on heart, needs both a companion for the grieving child and a robot guard who will remind the girl to wash her hands and put the glasses on the pedestal – banalities that she herself has neither the time nor the will to deal with. In short, she programmed her way out of the trap of motherhood. Johnstone doesn’t moralize about this, he just observes: isn’t a smart doll just a logical extension of leaving children glued to all sorts of screens when we need a moment of peace? Will we one day look at these tricks the way we look at advertisements from the 19th century recommending cocaine tablets to children with toothaches?

Gemma hopes to develop the most authentic relationship between M3gan and Cady, which she can then use to present the project to her skeptical boss. All well and good – until the murders start. Anyone who has seen at least one film about artificial intelligence in their life, e.g. 2001: A Space Odyssey or Ex machina, can quickly predict when and how things will go wrong. M3gan is programmed to protect Cady from anything that might hurt her – whether it’s a neighbor’s dog or a juvenile bully at school…

In front of the camera, the character of M3gan comes to life with the help of a body double, the use of real dolls and a voice Jenna Davis – the ratio between realistic and non-life is just right to make you uncomfortable. M3gan is the embodiment of our distrust of artificial intelligence. At first glance, therefore, it is clear that the doll is evil personified: everything from her quasi-Victorian outfit with patent leather shoes and a huge bow to her glassy gaze and eerily still movements betrays this. She looks like an icy little emissary from the house of horrors.

She was no less thoughtfully chosen for her role Alison Williams: already in Peel’s masterpiece Run away! (and before that in Girls Lene Dunham) has proven to master a very specific nuance of manipulation that is inherent to the privileged class. It is very easy to believe that she would use the trauma of an eight-year-old for her own benefit.

It’s bizarre how long it takes Gemma to suspect something is wrong with the doll: it’s not that she’s a deeply immoral person, but she clearly has too little understanding of human psychology to foresee the long-term consequences of her indifference. By the time she admits that the doll is dangerous, it is of course too late: her boss (Ronny Chieng) was so impressed with the prototype that he already gave the green light for production. The film is, among other things, a condemnation of Elon Musk-type tech moguls who, in their rush to be the first to ship the next big thing, don’t think of themselves as potentially dangerous bugs.

M3gan’s killing spree doesn’t really begin until the last third of the film – and even when it does, it’s clear that the filmmakers aren’t interested in excessive, graphic violence. The murders mostly don’t happen on camera – probably because the film was able to get a PG-13 censor rating in the US. A pragmatic decision that prevented the film from realizing its potential, both in terms of M3gana’s bloody escapades and the moral questionability of Gemma’s actions. Like low budget horror it could have been a much, much bolder film if it had dealt more with the idea of ​​the uncontrollability of artificial intelligence instead of laconic one-liners. It is difficult to get rid of the feeling that, after a long introduction, the final stage of the action is rushed and too superficial.

A bitter aftertaste is also left by the cynical final scene, which leaves the door wide open for the continuation of the franchise (toy sales are probably a given anyway). And yet he has M3gan legitimate place in the contemporary cinematic landscape: isn’t the killer doll an ideal illustration of our bizarre, increasingly symbiotic relationship with technology? This gave us both seemingly harmless toys to waste time with, as well as means of mass murder. And M3gan it’s a 2-for-1 package: it comments on the invasiveness and ubiquity of modern technologies in our lives, but it doesn’t do so from a “boomer”, a priori dismissive perspective. It just suggests that it might not hurt to put some energy into building relationships with fellow humans, not just apps.

Previous article
Jurica Golemec’s idea was for Glas to stay with Cedevita Olimpija
Next article
This year, the World Economic Forum is focused on energy and nutrition