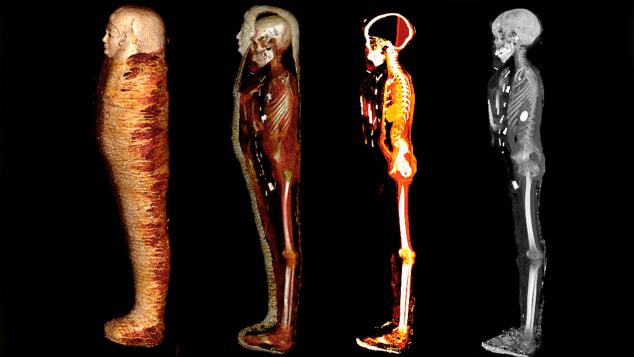 Archaeologists are getting to know the boy who died 2,300 years ago in Ancient Egypt better. The little deceased was mummified by his contemporaries and accompanied on his way to the afterlife with a golden death mask and 49 amulets that were supposed to protect him.

In the worldview of the ancient Egyptians, death was only a transition to the afterlife; some of the dead were therefore given precious grave accessories as a way to travel to the afterlife. In order to be able to see them, mummies once had to be opened, but now the profession can use a non-destructive process to reveal information invisible to the eye – this time about the mummy, which caught the nickname “golden boy”.

So the approximately 2,300-year-old mummy was never really opened. Magnificent burial appendages were revealed by X-ray imaging with a computed tomography scanner, summarizes an article in the scientific journal Frontiers in Medicine.

For the last hundred years, the mummy lay forgotten in the museum’s basementThe mummy, discovered in Upper Egypt in 1916, dates from the Ptolemaic period from around 330 BC. Since its discovery, it has been kept in the basement of the Egyptian Museum in Cairo, where no one examined it for a hundred years. On the basis of computed tomography, the researchers found that it was the mummy of a boy about 15 years old and 1.3 meters tall. Among other things, a golden amulet in the shape of a tongue was placed in the mouth of the deceased, which was supposed to enable him to speak in the afterlife.

Each amulet had a specific purposeThe mummy was decorated with 49 amulets neatly arranged in three rows between the folds of bandages and in the body cavity, she said Sahar Salim, professor of medicine at Cairo University and leader of the study. Amulets are made of gold, semi-precious stones, fired clay and ceramics. “Their purpose was to protect the body and give it strength in the afterlife,” she added.

In Ancient Egypt, it was believed that the spirit lives on in the afterlife after death. Entry into the afterlife was possible only after a dangerous journey through the underworld and after the judgment of the last court. Therefore, relatives and embalmers worked to enable the deceased to enter the afterlife and protect his body.

The scion of a rich familyThe “golden boy”, who probably belonged to a higher social class at the time of his death, was therefore also given shoes. “The sandals were supposed to enable him to run out of the coffin,” said Sahar Salim. In addition, the boy wore a gilded mask and breastplate. According to the researchers, after the boy’s death, the brain was removed through the nose, and the skull was filled with resin. Apart from his heart, his internal organs were also removed.

He is not moving to a new museum yetThey are currently building in Giza near Cairo The Great Egyptian Museum, which is expected to be officially opened this year. Many of the artifacts are still on display in the ancient Egyptian Museum in central Tahrir Square. “golden boy” will be on display in the main hall, along with some CT scans and a copy of the scarab “heart” amulet. The installation will teach visitors about the mummification process and burial rituals of Ancient Egypt.

Previous article
At least one dead as blizzard triggers lockdown in Japan
Next article
In ZD Šiška, patients mostly welcomed the opening of clinics for the undiagnosed