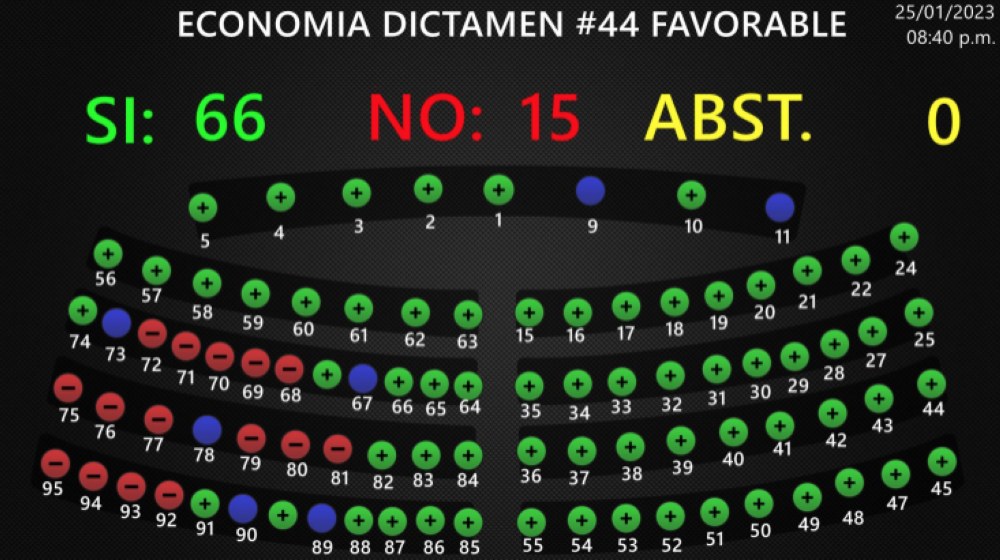 An amendment proposed by Suecy Callejas was approved by 66 votes, stating that the ban on civil servants “does not qualify as an owner, partner, shareholder, manager, manager, director, director, trustee or legal representative”. corporation” has been added. and her family become bidders “with their own institutions.”

Shortly after approval of the regulation, Nuevas Ideas tonight sought approval of the “Act on the Creation of the Public Purchase Authority” (DINAC) with an exemption from the procedure. The initiative was announced today by the Minister of Economy. The paperwork waiver was approved by 59 votes.

As a decentralized body with administrative and budgetary autonomy, the Directorate General will be the “government body for public procurement at the national level”. DINAC plans, monitors, supervises, modernizes and controls everything related to public procurement.

DINAC will propose an annual policy for public purchases to the Council of Ministers. Each Head of Procurement Department of each Public Authority (UCP) must comply with the DINAC Guidelines and provide DINAC with “all necessary information” in a timely manner. Deputy Jorge Castro called him a “state purchase investigator.”

In Article 25, Deputy Commissioner René Portillo Cuadra added advisors and consultants to the ban, requiring them to be state bidders or contractors. He also called for adding clause ‘g’ to ‘persons with conflicts of interest’ as provided in the Government Ethics Act. Not approved.

The law regulates the selection of contractors made by states to carry out acquisitions or purchases through competitive bidding, price comparisons and direct contracts.

Consultant engagement can be done through one of seven steps, including lowest cost or quality based selection, single source or individual consultant selection.

Controversies: LACAP, contracts, corruption, the end of the world…

Vamos deputy Claudia Ortiz assured that the seriousness of the regulation is that a significant portion of the taxes paid by Salvadorans are spent on public purchases. “What are they going to do this for? This government is getting in the way of her LACAP,” he asked.

Ortiz has ensured that the government does not apply LACAP to contracts related to the construction of trains, airports and electronic voting. “The results don’t look good. LACAP has thwarted this administration. Let’s not forget the day these delegates licensed to steal. What is about to be approved will create more poverty.” Let’s go,” he said.

Deputy Rodrigo Ávila (Arena) finally ensured that the law applied “to the city hall and the small contracts to which it applies”, claiming the exclusion of strategic projects for which deputy Carlos Bruch replied that he received a bonus Did. .

Deputy Director Annabel Veloso (FMLN) has denounced corruption in government officials during the pandemic, including contracts for $750,000 face masks from companies. “Don’t come here. You don’t have to take a pure bath. Exactly, there is a mechanism to leave with this law,” he asked.

“If they have evidence, why don’t they report it?” Alexia Rivas of Nuevas Ideas ironically replied that the opposition predicted “the end of the world” by law. In supporting President Naive Bukele’s project, the Vice President asserted that “more than 96% of Salvadorans cannot be wrong.”

“The end of the world for you will be the loss of your privileges,” Claudia Ortiz replied, to which Rivas replied, “This servant has no privileges.” I applauded.

Deputy César Reyes (Arena) asserted that the law directly causes abuse of contracts and argued for excessive booking of purchases in various state institutions.”You are opening the door to corruption. This law I can’t believe things will change in 2018,” he said.

“Do they listen to the nonsense they say?” replied Deputy Jorge Castro. Soriano replied in a speech. “Anyone who tries to touch a Salvadoran penny, and whoever remains to wear it, will go to jail,” he said.

Investigation of police colleagues who tried to help cover up the factsProsecutors in Memphis, Tennessee, have filed charges against five police officers for the...
Previous article
UN High Commissioner for Human Rights Visits Venezuela to Discuss Human Rights with Government
Next article
About 100,000 Salvadorans living abroad