Mušič set many milestones for Olimpia, but the goal for the semi-final of Liga Ebel 2012 stands out 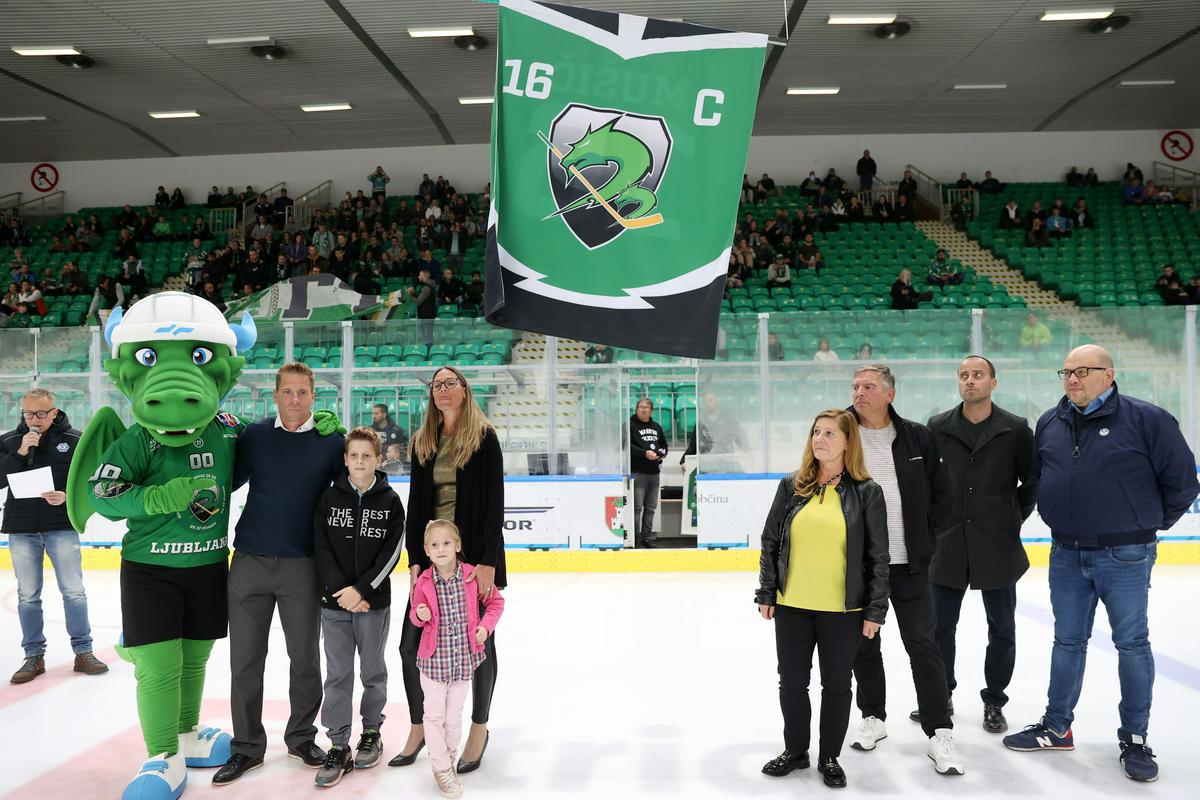 He might become a coach when the kids grow up

On Sunday, there was a festive evening in Tivoli. Aleš Mušič played 21 seasons for Olimpija, and now his jersey hangs under the ceiling of the hall at Celovška 25. Tomaž Vnuk finally got company, and in the coming seasons someone else would deserve this special honor.

The 40-year-old Mušič has set milestones in the green and white jersey that will be very difficult to surpass. Bojan Zajc and Dejan Kontrec played 17 seasons for Olimpija, Igor Beribak and Boštjan Groznik 16 each, Nik Zupančič 15, and Tomaž Vnuk 14.

He played 1014 official matches for Olimpija, he collected 703 points. He scored 281 goals and contributed 422 assists for the Dragons. The most important goal is still very well remembered by Olimpija fans. In the sixth match of the quarter-finals of the League Ebel On March 1, 2012, he decided the match against Fehervar (4:3), and the people of Ljubljana won the series 4:2 and qualified for the semi-finals.

Only in the 2017/18 season did he go to Hungary because he wanted to stay in the League Ebelthe only year he played abroad in his career for Fehervar. On Sunday, the captain of the Hungarian team, Janos Hari, also brought a gift to the long-time captain of Olimpija.

In the spring, it appeared that Mušič could also extend his career for one season as it was agreed upon for further cooperation, but then it fell through the cracks. The fans were furious, as this is not the right way to treat an icon of the club in such moments. They have not had any contact with coach Mitja Šivic in recent months.

How did you experience the gala evening in Tivoli, when you also officially ended your career?I think the whole thing was nicely executed. The wishes of former teammates were very nice. Now my jersey hangs under the ceiling in Tivoli and this is proof that I gave something to Ljubljana hockey. Of course there was some trepidation, that doesn’t happen every day. A great honor for me.

What will remain in your memory the most?You quickly forget the bad moments. Only beautiful moments remain, there were many of them all these years. We also enjoyed many successes with the national team. We always got along very well in the dressing room. What I will miss the most is the full stands when we hit the ice. The most important matches stay in your memory.

Your professional career was 22 seasons long, 21 of which you played for Olympia and one more for Fehervar. Was it a decision or coincidence?I always took it season by season. In retrospect, it would have been very good, if would play another season abroad. I had a great time in Hungary, we got along quickly, the organization of the club worked flawlessly. At that time, everything in Tivoli was up in the air. The question is how would you decide if at that time it would already be known which league Olimpija will play in. I wanted to play in the League Ebelso I decided for departure to Hungary. In 2018, I wanted to play in the second consecutive Olympic Games. Looking back, I have no regrets. I am very satisfied with my career. I don’t know what would happen if would move together with all foreigners in 2012 to Beljak. I had a great opportunity then.

The derbies between Olimpija and Jesenice still have a special place. The charge has dropped considerably in recent years. On Wednesday, it was Squinted only 1500 spectators, although it went for the final match of the Cup of Slovenia?The rest of the games we play are not talked about that much. Derbies are always special. When I sat in the packed stands as a kid, it was unforgettable. In the 1990s, fans lived for this match. The rivalry was present on the ice and in the stands.

The Slovenian Cup is not a magnet for viewers. I think that much more spectators gather at the final matches of the national championship. Today’s derbies, of course, cannot be compared to the nineties, when the halls were packed long before the warm-up. I hope there will be an atmosphere like this again. The fans choose the matches in the League playoffs IceHL it was fashionable to be at a match. We also saw this in the spring against Beljak. The people of Jesenice must return to the League IceHLand then the derby will be valid again.

Who were the best players at Olimpia with whom you shared the dressing room?When I came to the dressing room at the age of 18 and Tomaž Vnuk and Igor Beribak were sitting next to me, it was something incredible for me. Ivo Jan had an exceptional nose for goal, he was capable of scoring at any moment. Among the foreign hockey players, Todd Elik and John Hughes stood out.

Years ago, there were salary problems at Tivoli for many years. Many times you had to negotiate with the club management. SŽ Olimpija operates as an organized club. Have there been any problems in recent years? or is this a true professional club that can compare to their austrian rivals?Olympia cannot be compared to Salzburg, Vienna or Cologne residents. The club is organized. I never looked at the bill because the salary always came on the date. The equipment was always ready. In the last four years, there have been no more problems at Olympia.

The performances in Sochi and Pyeongchang will be special for all Slovenian hockey players. Which Olympic Games did you remember the most?Definitely the first in Sochi, as all the best players from the NHL were present at the time. It was something special to play against the best hockey players in the world. That was no longer the case in Pyongyang. The very opening of the Games in Sochi was something special.

You also successfully finished school, but many athletes give up too quickly. How did you manage to balance top sport and school?I never had any problems with school. I went to Šiška high school. The professors were very helpful to me, on average I was only present once or two hours. Mainly subjects where the material had to be understood. I met with the professor and we processed the material together. These were some kind of individual hours. I knew I needed to get an education. I wanted to enroll in college for computer science, but I wouldn’t be able to balance it all with a hockey career. I have decided for Faculty for social sciences, as there are the most subjects that you can learn from a book. It was not necessary to be present at the lectures. I really wanted to get a seventh level education.

What are the plans for forward? Want to stay in hockey? After the end of your career, you need to take some time off for reflection. I have a desire to be able to make a living from trading the stock market and cryptocurrencies. I’ve always believed that you should try to generate something besides your primary income. In sports, one injury can derail all your plans. I would really like to teach knowledge to the young, but not yet at this moment. The son is 11 years old, daughter but four years. The big difference is if you are a coach or an actor. The coach needs even more time. Preparation for the match is demanding. In particular, the coaches of the younger selections have the most work in the afternoons and at weekends, when the family is at home. It doesn’t work for me right now. Maybe it will be different when the children are independent.

Previous article
Even the Victoria and Albert Museum withdrew the name of the Sackler family
Next article
Mario “Pogo” Carneyro, Founder of Los Peores de Chile and Fundamental Figure of National Punk, Dies