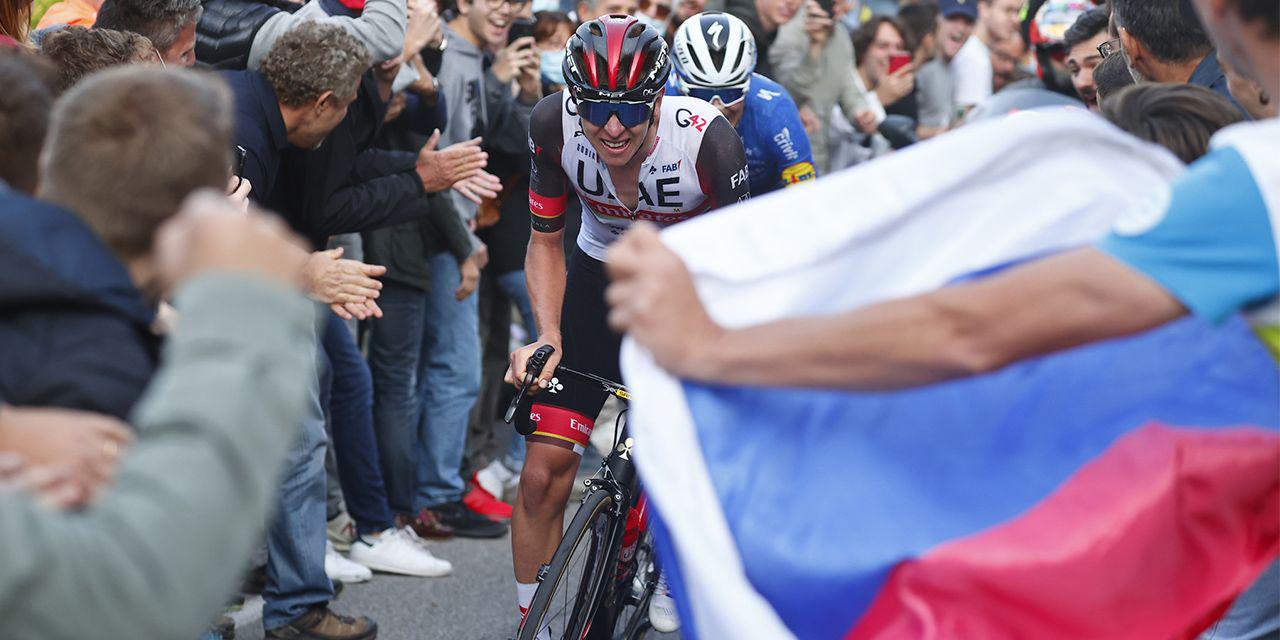 On Saturday, the last, fifth, cycling monument of the season, where Pogačar defends last year’s victory

The Classic of Fallen Leaves on the second Saturday of October traditionally ends the cycling season of the elite on the road. The defending champion and the first favorite to win the fifth cycling monument of the season is Tadej Pogačar, which will make him the target of all tactics and attacks.

On Lombardia is probably the most ungrateful to be the first favorite to win on one of all five monuments. Primož Roglič ruled in both 2019 and 2021 on autumn Italian classics: last year he won so on Giro dell’Emilia like on Milan-Turin, and three years ago on Emilia and Tre Valla Varesine. A on in the main race he was constantly under pressure, both from expectations and rivals, and had to settle for 7th and 4th place.

Tadej Pogačar was firstly second last week on Racing according to Emilia, where on steep climb on A dream Luca he wasn’t like Enrico Maso, but that’s why he celebrated on Three valleys Varese, where he won in a group of 23 riders with a long sprint. Obviously right now Move on wins the sprint of the diluted group more easily than on target slopes, which made him an even bigger favorite to defend last year’s victory on Il Lombardy.

This time from Bergamo to Como, but without Sorman

But last year it was Slovenian champion celebrated in Bergamo, but now the goal of the 116th edition of the Lombardy Race will be again in Como, according to the agreement. The 252.2 km long day will thus begin in Bergamo (start at 10.10)and nine categorized ascents are spread across the Lombardy hills, with a total of 4,566 altitude meters. On big disappointment is missing again Sormano and the wall on Sormanand after 180 km of warm-up, the decision will be made in the last 70 km along and above Lake Como.

An iconic climb on Madonna part Ghisallo (8.6 km with 6.2%) will herald the grand finale, where one round will take place in Como itself, with two rounds on A dream Farm work Battaglio (2.7 km with 7.2%), and in between on steeply Civiglio (4.2 km with 9.7%), who can decide like this on ascent as on demanding descent. After the second climb on Battaglio is best expected in central Como around 5 p.m. Weather on the classics of fallen leaves will be more than ideal: sunny and unremarkable weather and with temperatures up to 23 degrees Celsius.

Emirates for a diluted group sprint?

According to what was seen over Bologna and v Wollongong would rivals had to try to shake off Pogačar on Civiglioand already throughout the day on test his extremely strong team UAE Emirates, which also includes David FormulaJoao Almeida, Marc Hirschi, Alessandro CoviBurst Mother and Diego Ulysses.

“My team held the core together, especially Diego Ulysses was outstanding. Sprint was the best choice for me in the finish of the race, everything unfolded perfectly.” after the victory on Tuesday in Varese recounted Pogačar and confirmed that at the moment he trusts his sprint more than the attack from a distance, with which he pulled off the winning move last year. “A good performance against Lombardy, but it will be more difficult than last year,” the 24-year-old is aware that it will be difficult to defend the victory on the last monument of the season, which was last achieved by Spaniard Joaquim Rodriguez in 2013.

As the first challenger, he did on Italian classics set by Enric Mas and his team Movistar. But since Mas is not exactly known as the rider with the best sprint, the Spanish team could work for the third-placed Varese. Of course, it is not superfluous to emphasize that it will be for the 42-year-old Alejandro Valverde this is also the last race in a rich career.

Il Lombardy 2022 will also be the last race for the other great champion Vincenzo Nibaliwhich was also in the foreground in the past days and most likely will be on Civiglios trying to repeat the winning descent of 2017 and 2015.

Despite losing the overall victory by a second on He showed more than promising form to Croatia Jonas Vingegaardfor whom Lombardy is the main challenge after the big victory of the summer on Racing around France, when he had already defeated Pogačar. Big ambitions on the monument has the German team Bora Hansgrohe with Sergio Higuit (to others v Varese) and Alexander Vlasov.

When mentioning strong teams, Ineos cannot be left out, where they will try to say goodbye with a victory Adam Yateshe also has a more than decent sprint in a diluted group Daniel Martinez. Belgian wolf pack it comes without the world champion Remac Evenepoelbut that’s why they are always unpredictable Julian Alaphilippe and Andrea Baggioliwhile last year Pogačar’s only rival for victory in Bergamo, Faust Masnads it is not due to illness.

Is Mohorič really just an assistant?

The third Slovenian on starting tickets for Lombardy is Matej Mohoričthe winner of Croatia, which, however on the paper is not the captain, as they will be at Bahrain to Victorious raced for Damian Caruso and Mikel Landa. But regarding on the way it is on Sunday in Zagreb with sprinting turned the tide of the race, second place on Gran Piedmont and his mastery of descents place Mohorič in the wider circle of this time a truly wide circle of favourites.