Tite on the starting Neymar: “He will definitely play at the World Cup” 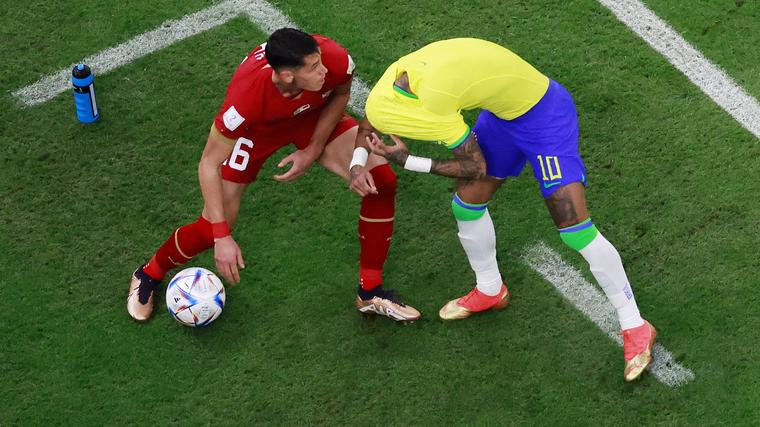 Suffered nine fouls, but despite the pain, the second passer for both goals

After an exciting game and an opening victory over Serbia (2:0), the first name for Brazil was the two-time goalscorer Richarlison, but after the end it was Neymar, his tears on the bench and his sprained ankle, who were once again troubling the fans. Coach Tite consoles them that the captain will still play.

“You can be sure that Neymar will still play in the World Cup, I am absolutely sure of that. He will play in the Copa!” was clear and concise Brazilian coach Tite when asked how bad it is with the captain, who was replaced in the 80th minute due to an injury to his right ankle.

Neymar he limped to the bench and pulled his jersey over his face and sobbed as a doctor and physio checked on the ankle that had taken the worst of the Serbs’ blows. In the aforementioned 80 minutes, Neymar was the victim of fouls as many as nine times, previously the record for the 1st round of the WC 2022 was a maximum of 5 fouls. Judging by the footage, Andrija Živković dealt the worst blow to the Brazil captain when he intervened in the 40th minute. In total, the Serbs committed 12 fouls against the Brazilians (vice versa Selection only seven).

The record holder for the number of fouls above him

Now the 30-year-old is often accused of simulating and selling the gravity of fouls, but statistically, it is Neymar who holds the infamous record of the player on whom the most fouls have been committed in a single match in the history of World Cups (including the 1966 World Cup). In the World Cup 2018 match against Switzerland, the opponents stopped the Brazilian team 10 times with fouls, but then Neymar finished the match in the group stage (1:1).

“I want to make a technical and tactical comment specifically in connection with Neymar. With the two goals we scored, he already felt his ankle, but he still played because the team needed him. He was able to overcome his pain and was it is involved in both goals, especially decisive in the first one,” Tite also emphasized how important a role Neymar played in breaking through until the 60th minute of an extremely solid Serbian defense, which fell apart after the first goal, as if eagles gave in, and the soccer samba began.

According to hockey: two assists for Neymar

The national team doctor Rodrigo Lasmar confirmed with the selector that the captain came to the break with a sprained ankle, and they thought twice about replacing him before, with a 2:0 lead, it was enough and they took him off the green.

With the leading goal, it was Neymar who overplayed, penetrated into the penalty area and set up a shot for Vinicius, whose deflection he then put into the net Richarlison. But even with the second goal, Neymar was the initiator of the action’s conclusion. During the walk, he passed on the left side to Vinicius Juniorwho then danced past the Serbs and sent a template for scissors Richarlison. In short: according to the hockey count, Neymar would be credited with two (secondary) passes.

Neymar himself did not comment on the injury and his health after the match.