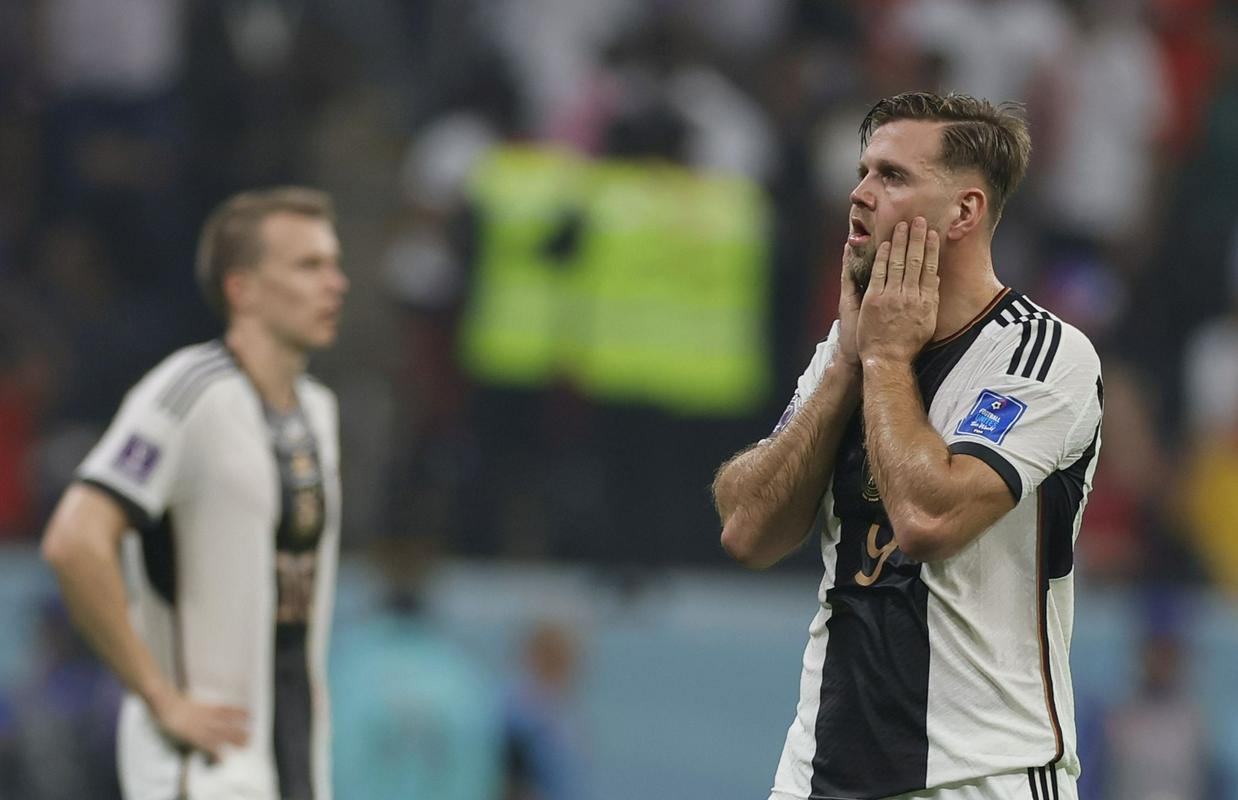 Havertz: We deserve to go home!

Until the World Cup in Russia in 2018, Germany had never finished their performances after qualifying. Now this has happened twice in a row. Last year’s European Championship also brought disappointment, and the home Euro is only a year and a half away.

Defense is a big problem. In all of the last three major competitions, the Germans failed to keep a clean sheet even once. Four years ago in Russia, they opened the World Cup with a shocking defeat against Mexico with 0:1 and went home after losing to South Korea with 0:2.

This time it was a fatal 1-2 opening slip against Japan after they squandered a 1-0 lead and numerous chances to go ahead. Against strong rivals elf he always plays very well. This was shown against Spain (1:1), when three points were also close. The 4-2 win over Costa Rica at the Al Bajt Stadium ended up being way too low. A 10:2 victory led to the round of 16, but such an outcome was not realistic.

The Spaniards elegantly avoided the Croats and Brazilians No one in the German camp dared to think publicly about the Spaniards’ calculations before the final round, but Group E played its final round on Thursday night. Already in the afternoon, it was clear that Morocco won first place in Group F, while Croatia finished in second place.

The Spaniards, of course, wanted to avoid the world runners-up in the round of 16, and the winner of this clash would then very likely meet Brazil in the quarter-finals. With the defeat against Japan, Luis Enrique’s chosen team will face Morocco on Tuesday, where they will be in the role of clear favourites, and in the quarter-finals they will probably face the Portuguese.

Flick angry already at the breakCoach Hansi Flick was the least depressed of all. The Germans did their homework, beating Costa Rica by two goals. They had 69% possession of the ball, eleven shots on goal and as many as 14 corners. Teenager Jamal Musiala hit the post twice more in the second half.

“Already at the break, I was very angry in the dressing room, because we had a minimal advantage. We were told that we had to have a big lead after the first half. It could be 3-0 or 4-0 after the break, and of course that would affect the second match of this group as well. We failed to increase the pressure on the Spaniards. We wasted many chances in the first half, Costa Rica got the momentum and managed to turn it around at the start of the second half. However, I must emphasize that we won the match with a two-goal difference. We didn’t get relegated because of this game. The last 20 minutes against Japan were crucial. We also had several chances against Spain, but we were not ineffective,” emphasized the German coach, who won as many as seven laurels in a year and a half on Bayern’s bench.

He wants to sit on the bench at his home EuroThe 57-year-old Flick succeeded Joachim Löw after the disappointment at last year’s European Championship. He has a long-term plan and contract until the end of the next Euro, which will be held in Germany from June 14 to July 14, 2024.

“The disappointment is huge. We prepared a lot for the tournament. I want to remain a selector, I really like doing this job. I don’t decide who will sit on the bench at the European Championship. We have a very good team, some great young players as well and it will be a big challenge to lead this team on home soil,” added Flick, who will still be able to count on veterans as well. Manuel Neuer would very much like to defend at his home European championship.

Müller: It’s a complete disaster! Much more depressed was Thomas Müller, who once again did not find himself in the position of striker. He is an attacking midfielder by profession and knows how to employ snipers perfectly. At Bayern, it was Robert Lewandowski for eight years, and this season he was succeeded by Cameroonian Eric-Maxim Choupo-Moting.

“At the beginning of the second half, we wanted too quickly to increase to 2:0. We lost our discipline in the game. I think we pressed the whole meeting. The desire was huge. We had 32 shots. It was difficult to expect a miracle and a victory with a seven-goal margin. Costa Rica is not a bad team at all,” reflected Müller, who shone at the 2010 and 2014 World Cups.

With a lump in his throat, he spoke about the outcome of the second match in Group E: “It’s incredible that the Japanese managed to defeat the Spaniards after falling behind at halftime. We did our homework, we won by two goals. The realistic scenario was that the second leg would be won by Spain or the match would end in a draw, but it didn’t turn out that way in the end.”

“We played two very good games. We can be satisfied with the game against Spain and the draw was also fair. We boiled it all down against Japan, where we were in the lead and had every thread of the game in our hands, and then conceded two goals in the last quarter of an hour. The disappointment is huge. This is a total disaster! We know how to play against quality teams. If they had repeated the performance against Spain, I am sure they would have gone very far in the knockout stages,” assessed Müller.

He will consult with his wife about the continuation of the national team journeyHe will turn 34 in September. It is very likely that he will only play for Bayern, and his future in the selected line is uncertain: “We have to go home now. If this was my last game for the national team, I would like to thank all the fans. We experienced unforgettable moments together. I haven’t decided yet if I will continue. I have a conversation with my wife.”

Havertz: We deserve to go home!The hero of last year’s Champions League final in Porto, Kai Havertz, orchestrated the comeback of the Germans with two goals after entering the game. “No one expected the Spanish to lose. We have ourselves to blame because we had enough chances to beat Japan and Spain. With the victory over the Japanese, Costa Rica allowed us to think about promotion in the last round.”

“We conceded two goals very cheaply, but in the end we still managed to turn things around. Already from the reactions of the bench and the fans in the stands, we felt that everything was going wrong in the second match. We deserve to go home! We have a very high-quality team, but we suffered a big slip-up against Japan. This match ruined all plans. German football is by no means second-rate. Eight years ago, Germany was on top of the world, but now we have been eliminated twice in a row after the preliminaries. I am confident that we will turn the curve upwards again,” the Chelsea striker announced.

Bierhoff: We were at the top for many years and rested on our laurelsSporting director Oliver Bierhoff, who has held this very well-paid position for 18 years, will receive the most criticism.

“We are very angry. It’s hard to calm down and analyze right after the game. The last 20 minutes against Japan were crucial. We paid a high price for this defeat. We believed that the last round would end according to our wishes. If they had taken their chances and led 4-0 at the break against Costa Rica, the Spaniards would have played a completely different game against the Japanese,” said the hero of the Euro 1996 final when he scored the first golden goal in history.

“I will not point the finger at the guilty. We all gave up. In the last four years, we often lose games when we have everything under control. We don’t have a real classic striker, which is crucial in such tournaments. We made mistakes in the youth categories, a striker cannot be developed when he is already 18 years old. For many years we were at the top of world football and we rested on our laurels. It is now known that we lack quality individuals and this will be known for several years to come,” the 54-year-old Bierhoff is not at all optimistic.

No replacements were found for Lahm and KlosePhilipp Lahm the last full-back who was in the highest world class. Flick tried Nic Schlotterbeck, Til Kehrer on the right, and Joshua Kimmich played in that position against Costa Rica. World Cup all-time top scorer Miroslav Klose is the last top striker the Germans have had. After a glorious victory at the World Cup in Brazil in July 2014, the problems began with no end in sight.

A summer fairy tale in 2006, and only a year and a half until June 2024… Germany was already in a major crisis at the turn of the millennium. At the European Championships in 2000 and 2004, she infamously finished after the preliminary competition. Jürgen Klinsmann took over as coach and at his home World Cup in 2006, the elf took an excellent third place. In the semi-finals, he lost to Italy only after extra time.

16 years ago, the World Cup was a real summer fairy tale. In a year and a half, the atmosphere will be brilliant again, and the Germans don’t have much time left to lay the foundations for a successful appearance at their home Euro.

Brazil's president promises an end to loggingMore than a third of the Amazon rainforest, the world's largest, has been degraded by drought and human...
Previous article
UN: We need a record $51.5 billion in humanitarian aid by 2023
Next article
Colonel Luis Lobo Castella