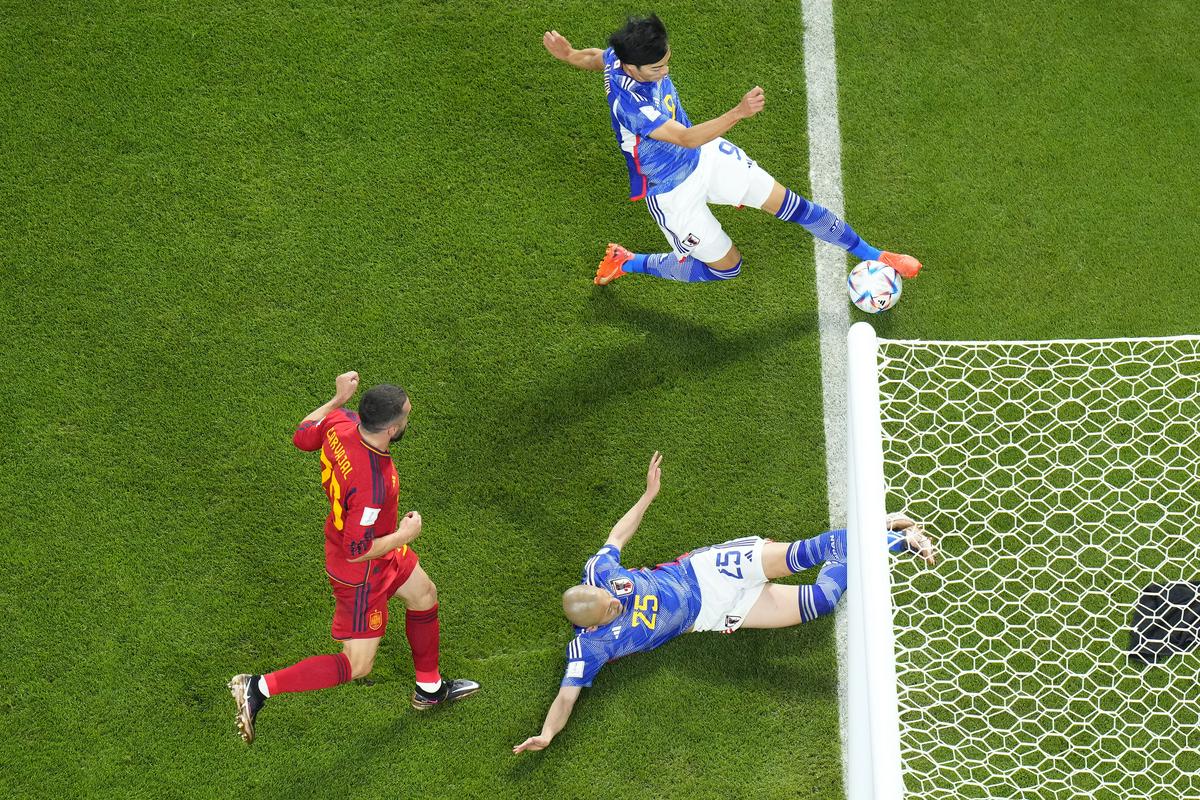 A ball is a sphere that can seemingly cross the line in its entirety from many angles, but if we turn around, we see that this is not necessarily true. An optical illusion that upsets the football world because of Japan’s second goal against Spain, which was fatal for the Germans.

Just three minutes after the equalizer, Japan took a 2-1 lead against Spain. A South African judge Victor Gomes decided on the field not to recognize the goal from the 51st minute, as the ball had already left the field of play. Reservist Kaoru Mitoma according to the referees, he was a fraction too slow on the green before sending the ball in front of the goal with a cross out of desperation, where Ao Tanaka scored an initially disallowed goal with his thigh.

However, the video referees or the Mexican referee intervened Fernando Guerrero, who viewed the available footage, including the goal-line technology camera. The latter is only useful for confirming goals, but one of the system’s cameras also covers the area outside the goal. Most of the televisions around the world showed footage that showed that there was already a lot of green between the ball and the line, by which it could be concluded that the entire extent of the goal-out crossed the line.

After a three-minute debate, Victor Gomes also went to watch the tapes and, to the surprise of the Spaniards, conceded Tanaka’s leading goal, which ended up giving Japan a sweet victory to advance, even winning Group E.

Below are some more pictures from the world agencies from the mentioned position, which confirm how easily the human eye is deceived by the contact of a sphere and a line in space. Photo: AP, EPA and Reuters.

The Spaniards themselves, who were already three minutes on their way home due to a turn in the second match between Germany and Costa Rica, did not get overly upset after the match. As if facing Morocco in the round of 16 would smell better to them than the duel with Croatia, which is now waiting for Japan.

But the goal was fatal for Germany. A football superpower, the four-time world champions, who in the end, after a lot of trouble, beat the Costa Ricans with the necessary two-goal margin (4:2), but the Spanish equalizer did not come out of nowhere. If the Spaniards drew 2-2, the Japanese would be eliminated and the Germans would advance thanks to a higher number of goals scored. In this case it would La Roja played with Croats, elf and with Morocco.

A phantom goal like in the 1966 World Cup final

The German public and media did not take the new debacle easily. At the same time, they also took some of their anger out on another phantom goal that affected them.

“The goal is checked for three minutes because the ball could have gone out of bounds before that. On TV it looks like it went all the way. It might have gone by a few millimeters but the goal counted as England’s goal at Wembley in the final… from 1966. Germany lost with a goal that is one of the biggest scandals in the history of football. It should never have appeared on the scoreboard!” they wrote at Bild.

The Wembley goal is Geoff Hurst’s goal in extra time of the 1966 WC final for 3-2 when the ball was supposed to bounce off the crossbar over the goal line and back out into the box. Goalkeeper Hans Tilkowski claimed all his life that the ball was not over the line at full volume. Referee Gottfried Dienst initially pointed to a corner for England, but after the intervention of the referee from the Soviet Union, Tofiq Bahranov, he awarded the goal. The shock for the West Germans was complete and in the end, the English became world champions for the first and only time ever with a 4-2 win at their home World Cup.

Back to the present and to the Japanese goal for 2:1. Much of the trouble and outrage in the football world and especially online is at the expense of Fifa and its sharing of footage and decisions from the VAR room. Below is the VAR analysis used in the German’s fateful decision, which was spun long after the match by Qatar’s official TV partner BeIn Sport.

But on the other hand, there was also a scene and a zoom in between the clips, which convinced the Mexican referee Guerrero to warn his South African colleague on the field, Gomes, about the possibility of the goal being valid. Finally, curvature and geometry exist and play an important role in playing the ball on a rectangular court.

Below is a practical demonstration of how the perception and vision of whether the ball is in fact over the line changes.