Golemac: We cannot play on two fronts with such a formation 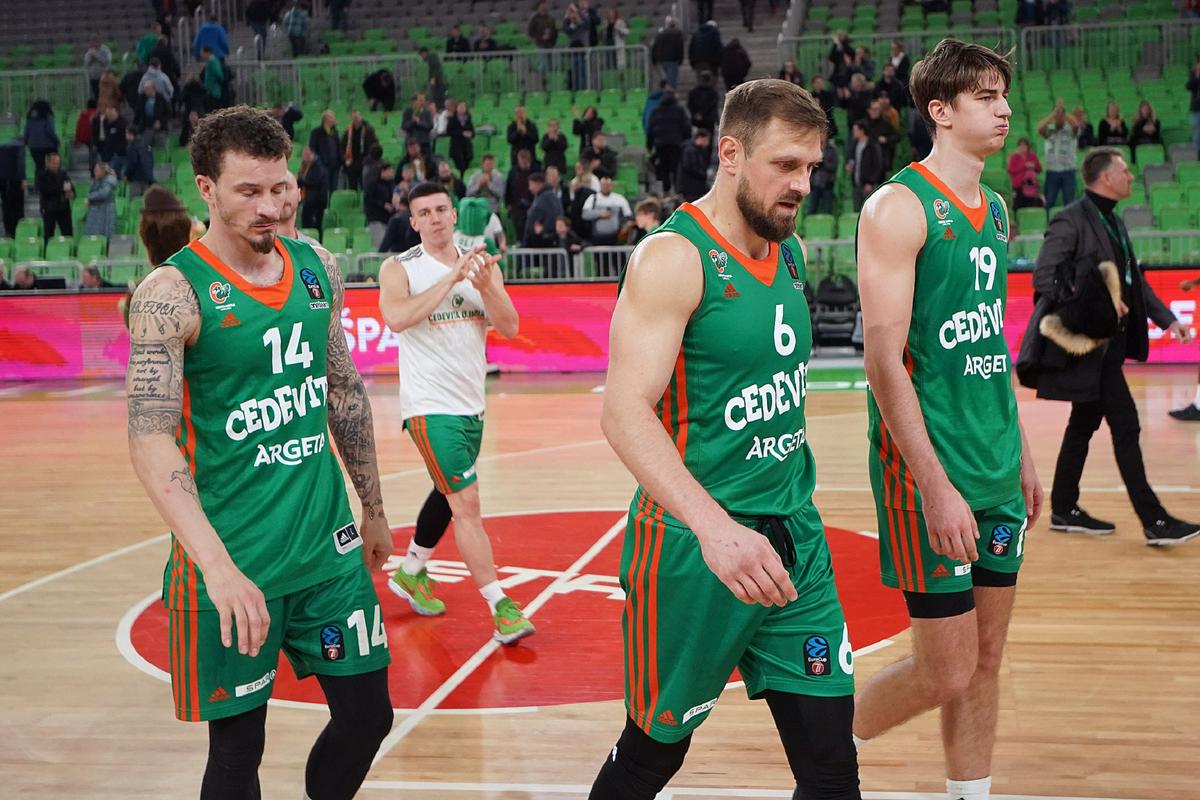 In three days visiting in Belgrade and Badalona

After the ninth defeat in 11 games, Cedevita Olimpija’s basketball players closed the door to the elimination fights of the European Cup seven rounds before the end of the group stage. Meanwhile, there is no end in sight to the health problems in the dragon’s nest.

In Ljubljana, Cluj registered its first ever away victory in the Eurocup. He was better with 88:80 and in the penultimate place at the bottom of the table, the dragons escaped by two victories. “I would like to congratulate Cluj for a well-deserved victory. They played better for 40 minutes. We were familiar with a short rotation, problems with personal mistakes… We couldn’t match them. There were too many fluctuations. We had some good minutes, but not enough to win,” was the very disappointed coach of Cedevita Olimpija Jurica Golemac.

Before the meeting with the Romanian champion, he emphasized that his wards must start the match better, like the last two against Bursaspor and Split. But as if sticking to the established scenario, the people of Ljubljana already trailed by a double-digit difference in the third minute. Defense was the problem again. The opponents easily outplayed the home basketball players and got open shots. The guests from Cluj shot 4/6 from behind the line in the first quarter, most of them when they were alone. On the other hand, the dragons, who once again, when they did not succeed, mostly resorted to only three-point shots, hitting only one three-pointer out of ten attempts. Thus, in the first ten minutes, the advantage grew to 15.

In 14 minutes, the people of Ljubljana scored as many as 41 points, but at the end of the half they played better defense, and the start of the second half was also successful. They didn’t score a basket for eight minutes, but they tied the game with a 15:0 run. Cluj stopped the rush according to the familiar recipe, when it played the home defense beautifully three times. It’s well over halfway through the third quarter Josh Adams, otherwise the biggest debtor of the match, took Olimpija into the lead, but they soon let it out of their hands. At the beginning of the last quarter, defensive mistakes caused a bigger deficit. After bad decisions in the attack of the home team, Cluj, who walked under the Ljubljana basket a few times, gained nine points. In the playoffs, more than not, the dragons tried to turn the score around, but they were far from successful.

“With such a line-up, we cannot play on two fronts. After the match with Split, we didn’t do a single training session with all the players. Alibegović was sick, Matković was missing again (problems with vertigo, op. a.)… But I would still expect better energy in the first quarter. We were really sleepy in that opening stretch and we chased them from then on.” Golemac spoke about the health problems that have accompanied the Slovenian champions all season.

“After each game, we gather for three days. We don’t train and we don’t progress. We are the only team that gets to the second part of the competition and is worse, not better. We gather after matches, repair injuries… Before each training session, I don’t know who will come to it. Mulalić has been playing four positions in training for a month. Iliri helps us by letting Daneu come to some training. The boys are aware, they want to, but it didn’t work out,” added the Ljubljana coach, who counted on them Zoran Dragic and Karlo Matković the host of the game, but so far in the season they have missed more time than they have played. In addition to them, Jan Kosi and Marko Radovanović are also absent for longer, but they would not have concrete roles.

Olimpija remains the team that loses the fewest balls and hits the most three-pointers per match in the European Cup, but at the same time has the most modest defense. He receives the most points, almost 91 per game. “We started too badly. We fought and tried to come back. I’m proud of how we fought even when we were behind at the end of the game. We need to be more hungry and start the games better. Health problems follow us all season. It’s hard to build chemistry after that, but we’ll keep fighting. In the end it’s just basketball,” he said Yogi Ferrell, who was by far the best scorer of the game with 27 points. At the same time, he collected only two passes.

In three days visiting in Belgrade and Badalona

In addition to the defensive problems, there were again too many individual actions in the attack. After a bad start, Ferrell just missed a throw, and Adams, who was not having his day, tried to force a play (again). He contributed eight points (2/8 field goal), and in 23 minutes, right before going to the bench, he made sure that he did not even have a negative statistical index. So far, he has not lived up to the high expectations in Stožice, as he was brought in as a starter in position two, where he has played excellently for the last three seasons Jaka Blažičand the American did not turn out to be a decent exchange.

After a bad start to the season, when they had problems with the rotation, Golemac said several times that they are waiting for the return of the absentees. Even when they returned, there was no drastic turn in the result curve, but the health problems continued. Last year, after an equally unfortunate start to the season, they admitted mistakes in summer recruitment and brought in reinforcements, which turned out to be a winning combination. This year there were no interventions in the acting mosaic. the exception was arrival Matica Rebca, who trained already during the preparations. Well, then he signed at the beginning of January Gregor Glas, which Olimpija lent him. When asked if they had discussed possible reinforcements with the management, Golemac only said: “I’ve been talking about it for three months. That’s not a question for me.“

The head of the Ljubljana club hoped that after the initial problems after the new year, his team would start playing as expected, but it is not going to happen. In the European Cup, after starting with six defeats, they recorded two victories, and after two failures in the first two rounds of the second half of the regular season, they found themselves in a really difficult position and the elimination battles are slowly receding. On Wednesday, they have a challenging away game in Badalona against the first favorite of the competition, Joventut. They are currently on a nine-game winning streak in the ABA League, but they face an away game in Belgrade against the extremely strong Red Star, who they will face just two days before the game in Catalonia.

Kopitar is visiting Florida with the Kings at nightThe best team of the NHL Boston Bruins experienced one of the rare defeats, to be...
Previous article
Apartment in Ljubljana with a new floor plan and an “open” concrete wall
Next article
A week of Slovenian drama with a dozen performances that also show a generational shift