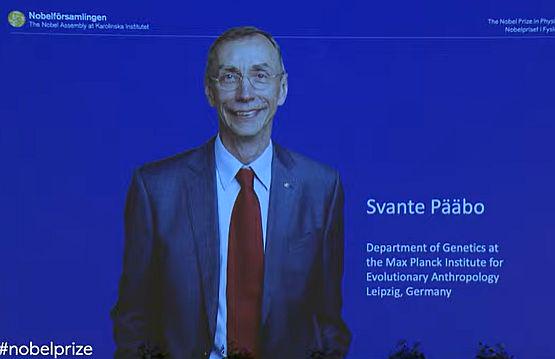 The list of candidates for all prizes is a secret, 343 names were nominated for the Peace Prize

This year’s Nobel Prize for Medicine goes to Svante Päaba for discoveries related to the genomes of extinct hominids and human evolution.

Among Svante Paab’s key discoveries is the sequencing of the entire Nedanderthal genome, which shed light on the connection between extinct ancestors and modern humans. It also shed light on the existence of a previously unknown human species, which they named Denisovans, namely on the basis of 40,000-year-old finger bone fragments discovered in Siberia. Denisovans members lived in different parts of the world, they explained in the explanation of the award.

Furthermore, by comparing the genetic records, he discovered that there was an interaction between the two now-extinct species of proto-humans, and that both species also passed on their genetic record to the modern human species, Homo sapiens, when it came out of Africa about 70,000 years ago.

“This ancient gene flow into modern humans is still physiologically important today, for example in how the immune system reacts to infections,” it says in the explanation of the award.

Pääb’s fundamental research established a completely new scientific discipline – paleogenetics. “By uncovering the genetic differences that distinguish present-day humans from extinct prehistoric humans, his research lays the foundation for research into what makes us uniquely human,“, the committee for awarding the award also wrote in justification

“He was overjoyed, speechless. He asked if he could tell his wife the news and I said yes. He was really excited,” said the Secretary General of the Nobel Committee for Physiology or Medicine Thomas Perlmann, who told the Swedish laureate, who works in Leipzig, the good news.

Paabo is the son of another Nobel laureate, Sune Bergström, who received the prize in 1982 for his contribution to biochemistry.

With the prize for medicine, each award brings a check in the amount of 10 million Swedish kroner (900,000 euros), thus begins the week of the announcement of the Nobel prizes, which will pass this year in the sign of the war in Ukraine. In line with tradition, the winners of the most prestigious peace prize will be announced on Friday in Oslo, while the winners in other categories will be announced in Stockholm.

Last year, they received the prize for medicine David Julius and Ardem Patapoutian for discoveries about temperature and touch receptors.

The deadline for nominations for the Peace Prize expired on January 31, before the Russian invasion of Ukraine. Nevertheless, the five-member Norwegian special committee was able to submit its nominations subsequently, which was able to take advantage of this opportunity at the first meeting of the year, which took place in the days after the beginning of the conflict.

Russia and China are also developing new bombersOn Friday in California, the United States presented to the public for the first time the latest...
Previous article
Due to a back injury, Blažič will not return to the floor until next year
Next article
On Sunday, 739 infections with the new coronavirus were confirmed