Anger in Iran is said to permeate all parts of society. “We want to be a normal country.” 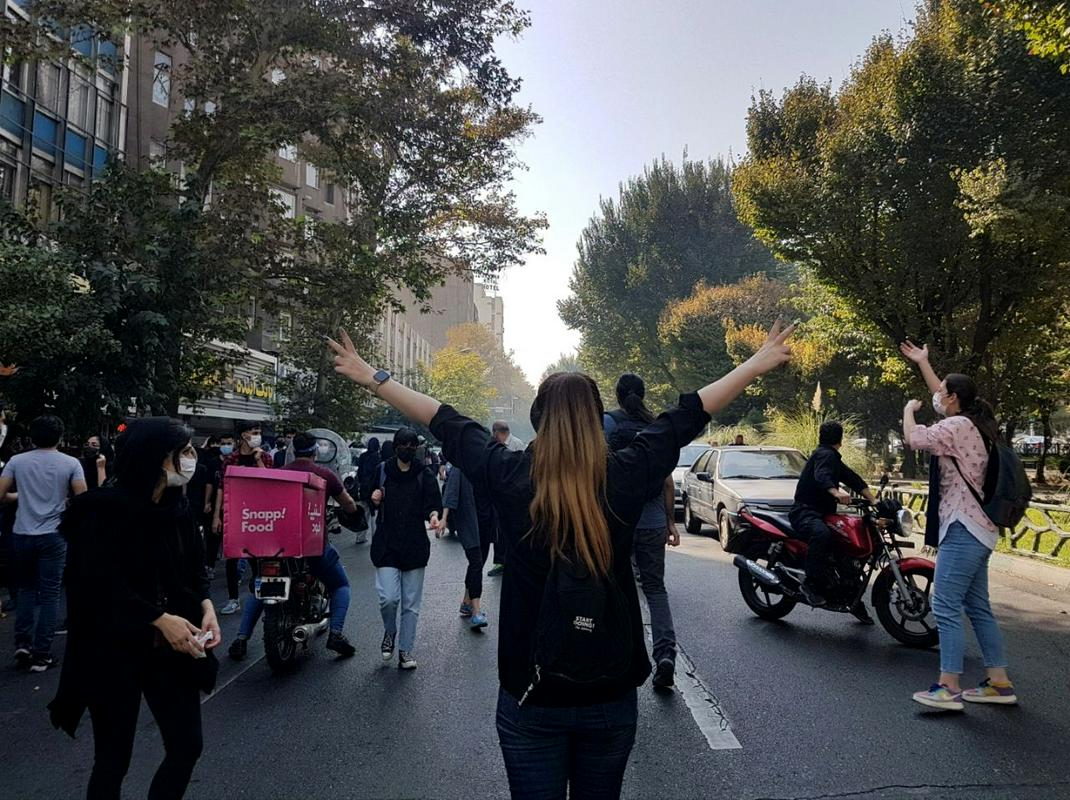 The Iranian authorities responded to the protests after the death of Mahsa Amini with repression and restrictions on communication. As four Iranian interlocutors told MMC, anger in the country is widespread from north to south, and the reasons go beyond the discriminatory position of women.

Protests in Iran, which began in the northwestern city of Sakez following the death of a 22-year-old woman who died on September 16 after being detained by moral police in Tehran for allegedly wearing an inappropriate compulsory head covering (hijab), continue and have spread throughout the country in the last few more than two weeks. There are reports of dozens of dead, hundreds, probably thousands of arrests, and attacks on police and state offices. It is difficult to assess the situation, as authorities have severely restricted communication both inside and outside Iran, but these are the largest protests in the country since 2019 over fuel prices, when 1,500 people were killed in a crackdown on unrest, according to Reuters.

The death of Mahsa Amini from Iranian Kurdistan has reopened the ever-present issue of the compulsory wearing of the headscarf, a symbol of the oppression of women in Iran since the 1979 revolution that brought Islamists to power, who then violently suppressed the remaining social groups that also fought back against the regime of King Reza Pahlavi, sympathetic to the interests of the Western powers. Women in particular have been under constant surveillance and victims of discrimination in Iran for the past 43 years, and this wave of protests is said to differ from previous ones precisely because of the focus on this issue and the fact that women play a leading role in it. But there are plenty of reasons for rage.

“There are many reasons for Iranians to protest, regardless of whether you are a man or a woman. No one is satisfied with their lives and the position of our country in the region and the world,” she wrote in an e-mail communication for MMC Mansoureh from Tehran (due to security concerns, we publish only the first name of the interlocutor, note a.). People are fed up with corruption, inflation that has exceeded 40 percent, food prices have even doubled in some places compared to last year, unemployment is around 10 percent, people are demanding freedom of speech, Mansureh emphasizes the intertwining of religion and politics that bothers many so much men than women.

With a 38-year-old Azam we were in contact via the WhatsApp application, but only in the form of text messages, since it was impossible to receive a call from Iran or make a call there. According to the Tehran-based film editor, the authorities control and restrict this and other similar applications for exchanging messages or making calls, such as Viber, Telegram, Signal, Skype. Azam wrote that they are human “exhausted by isolation and sanctions”. Iran, the main regional rival of the West and its allies in the area, has for decades been the victim of cruel sanctions, especially by the US and the EU, which cripple the economy of this country of 84 million people. According to Azam, it is “the regime with Islamic ideology caused all the problems – financial, cultural, educational and personal”. She does not consider herself a Muslim, she is not religious, just as many young people are not, she said, adding that the authorities in the Islamic Republic impose their religion on them.

The mandatory wearing of the hijab was introduced by Supreme Leader Ayatollah Khomeini shortly after taking power in 1979, despite earlier promises that it was not planned. “Do you know why they are obsessed with the hijab? The hijab is a symbol of the Islamic Republic of Iran and is extremely important to the government. If we were to say you can dress however you want, you would lose your character,” Azam explained. An Iranian lecturer and researcher said the same in a recent interview with MMC Azadeh Akbari. “Women’s bodies are constantly under surveillance because of the ideology of the Islamic Republic. The position of women, women’s bodies, are key to it,” she said. “The issue of women is central to how they understand the world, central to the Islamic Republic’s worldview and its ideology.” If the mandatory hijab is a symbol of the Islamic Republic and discrimination against women, it is not surprising that the symbol of this time’s protests is its burning.

“A fire still smolders under the ashes”

Restricting communication and blocking access to the web and social networks not only hinders protesters, but also harms thousands of businesses. As Azam said, many people have also made a living through platforms like Instagram during these difficult economic conditions. The authorities limit access to the Internet especially in the afternoon and evening hours, when people start to gather on the streets after work.

Protests continue and state repression is also intensifying. In some places, people no longer dare to go to the streets because of police violence. “I’m very afraid of the police,” wrote the 42-year-old about the authorities’ response to the protests Modzhgan. The fear of arrests is great, because the police do not care about people’s health, Mansureh wrote. Azam said that in the capital in recent days, streets and squares are being controlled not only by the police, but also by the volunteer paramilitary Basij militia and also by ordinary conservative, generally poorer people, who are hired by the authorities to suppress protests.

Also 39 years old Don she is afraid of the police and of being arrested. As she said, she can’t stand it of “physical and psychological torture”. She herself does not go to protests, she admitted, adding that this does not mean she is satisfied with the current situation in the country. “We are all angry with this regime. They ignored us for 40 years,” she said.

Due to increased surveillance, the situation in Tehran seems to be calmer now, but the situation remains tense. “A fire still smolders under the ashes,” Azam described the atmosphere. She admitted that she is afraid of being arrested because she knows what happens in prisons. They allegedly force people to make various confessions regarding their social, even sexual, lives. He does participate in protests, but he is not in the foreground. He says that most of the protesters are young, between the ages of 17 and 25. “I envy their courage,” she said. People her age and older people are more careful.

Al Jazeera reports that protests took place at major universities both in the capital and elsewhere on Saturday. Azam explained that the heads of universities set up by the government decided that the lectures would be held only virtually in order to silence the male and female students, and they are boycotting the lectures as a sign of protest.

Meanwhile, Zahedan, the capital of the southeastern province of Sistan and Baluchistan, which borders Afghanistan and Pakistan, reported a deadly gunfight on Friday. The main incident broke out around noon near the police station next to the mosque after prayers. Authorities said they responded to “terrorist” an attack by the armed separatist group Jaish al-Adl, which allegedly attacked three local police stations. In the ensuing shootout, according to the provincial governor Hosein Modares Kiabani at least 19 people died, another 20 were injured. Among those killed was the intelligence chief of the Islamic Revolutionary Guard Corps in the province Or Mousavi, several members of the local police and the Basij paramilitary militia. It is not clear whether the incident is in any way related to the protests that have flared up across the country and were also held in this city that day.

There is no hope for dialogue

Mansureh said the authorities are responding to protests the way they always have, arresting and killing protesters to scare people and discourage them from participating. Now they are repeating it, so she herself has no hope of change. Even Modžgan is convinced that with the authorities she describes as “dictatorial”, dialogue is not possible. Azam said that years ago, people wanted a dialogue with the authorities, which made these reformers popular, but that is no longer working. “People want to destroy the whole regime,” she asserted. Mansureh says the same.

“Dialogue with this regime? They have not listened to the voice of the people for years,” wrote Dona, who emphasizes that the authorities do not tolerate criticism, which is why many journalists were also arrested. A female journalist was also imprisoned Nilufar Hamed, which first reported the death of Mahsa Amini. A total of at least 20 journalists are said to have been arrested. Foreign media reports that “death to the dictator” can be heard shouting at the protests, by which people are referring to the Supreme Leader Ayatollah Ali Khamenei. Azam mentioned rumors in the country that the 83-year-old Khamenei is in very poor health or even dead. According to her, all generations of people hate him, but only a few respect him.

Protests have no leaders. The interlocutors say that people gather spontaneously, without the support of political forces. The demands of the protesters were also supported by some prominent Iranian men and women, including a former football representative Ali Karimi, who is said to live in the United Arab Emirates. Meanwhile, Možgan warns that the protests in Iran have so far been unsuccessful precisely because of the lack of leadership.

As the interlocutors emphasize, dissatisfaction in the country is present in all demographic groups. “This is the first time that people from north to south, from west to east have risen. Many conservative and religious people are saddened by what happened to Mahsa. This time they are angry both rich and poor, both educated and uneducated, old and young people. Everyone is angry. All of this has been caused by the injustices of the last 43 years,” Azam wrote. Mansureh emphasized that a huge proportion of the population is young. Many young people are unemployed, but they are highly educated, so they are all in a similar difficult situation.

The demands of the protesters are focused on women’s rights, but they are also broader. People demand the normalization of relations with the world, they want to “to connect with the world”, says Mansureh, they want decent lives, they want Iran to become, as Azam said, “normal country”. “I personally believe that we will not go back to two weeks ago, I am sure of that. We have all changed. Mahsa’s death woke people up,” she wrote.

Previous article
Another round of elections in Brazil, in which Lula and Bolsonaro will compete
Next article
Herro signed a 130 million contract