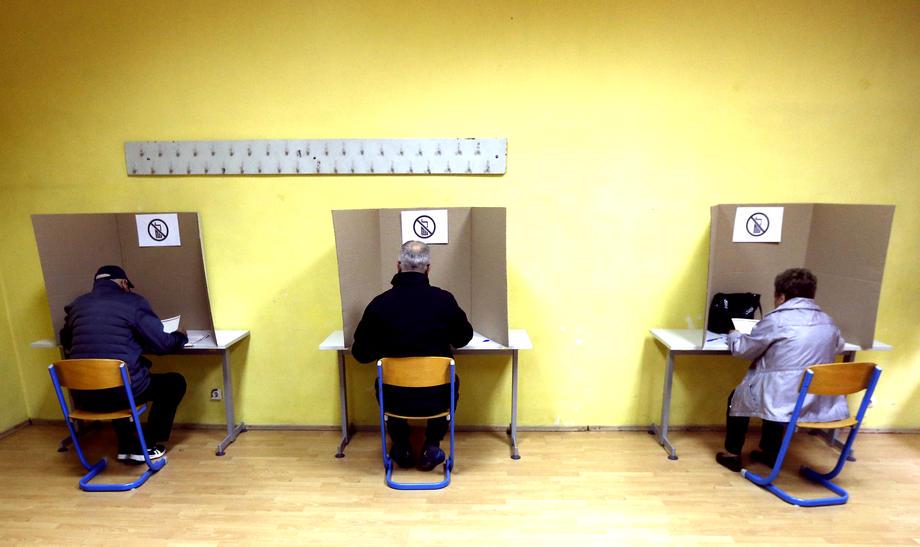 Denis Bećirović and Željka Cvijanović, a candidate of the united Bosniak opposition, were elected to the Presidency of Bosnia and Herzegovina after the partial results of the elections. For the Croatian member of the presidency, Borjana Krišta was tipped to win, but Željko Komšić overtook her.

As reported by the correspondent of RTV Slovenia from the Balkans Boštjan Anžin, among all the candidates for the highest positions in the country, the new Bosniak member of the presidency, Bećirović, was the first to start looking forward. He was supported by 11 opposition Bosniak parties, and according to the unofficial results of the State Election Commission (CIK), published around midnight, he received 55.78 percent of the vote, while Izetbegović received 39.31.

“I didn’t make false promises during the campaign. I know what we can do and what we can’t do. It’s time for a positive turn in Bosnia and Herzegovina,” said Becirović and called for the Union to the countries grant candidate status as soon as possible. Many see his victory as a step from an ethnic to a civic concept of the country, Anžin also reported.

Leader of the largest Bosniak party, SDA Bakir Izetbegović suffered a big defeat in the match with Bećirović. After it was clear that he would obviously not be elected as a member of the BiH presidency, Izetbegović asserted that the party is not in decline, but on the rise. “How to expect victory over 11 united parties and some embassies is an open secret. If there were nine of them I would defeat them, 11 I could not,” said Izetbegović.

The victory was also announced in the Serbian PDP party on Sunday. Their candidate Jelena Trivić namely, as they announced, she should become the president of Republika Srpska, since she received 51.2 percent of the votes. In their opinion, this is how she should defeat the leader of the largest Serbian party, SNSD, and the current Serbian member of the BiH presidency, Milorad Dodik, who was running for president of the Republika Srpska in the current elections.

Today’s partial results from the Central Election Commission show that Dodik, who also declared victory on Sunday, received around 30,000 more votes than Jelena Trivić and will thus be the president of Republika Srpska.

In the fight for the Croatian seat in the presidency of Bosnia and Herzegovina, according to the first partial results of the Central Election Commission – these were based only on the counted votes from just under 40 percent of the polling stations in the Republika Srpska and just under 55 percent in the Federation of Bosnia and Herzegovina – it pointed to a victory Borjane Kristo from the HDZ BiH, which was supported by all Croatian parties, received 51.36 percent of the vote and thus defeated the current Croatian member of the presidency Željko Komšićwhich received 48.64 percent of the vote. “I can say that I feel like the winner of the Croatian nation. If the results had been different, Bosnia and Herzegovina could have been the biggest loser,” Borjana Krišta said, according to Anžina.

Komšić, who the Croats do not accept as their legitimate representative, expected a victory, which would be his fourth.

The leader of the HDZ BiH, Dragan Čović, emphasized that without the Croatian nation and the Croatian National Assembly, it will not be possible to conduct politics in BiH. “BiH has only one path, and that is the Euro-Atlantic path. BiH must be organized according to the principle of all three constituent nations, and these nations must be represented by legitimate representatives,” he said.

This year’s elections were held according to the old electoral law, which has been the cause of tension in the country for many years.

High representative of the international community in Bosnia and Herzegovina Christian Schmidt announced on Sunday shortly after the polls closed that it had adopted changes to the electoral law, including the selection of members of the House of Nations of the Federation Parliament.

In a public letter addressed to the citizens of Bosnia and Herzegovina, Schmidt emphasized that he had taken decisions that would ensure that their vote would be taken into account and that their democratic will would be respected. Among other things, he explained that he simplified many procedures and introduced mechanisms for unblocking and strict deadlines, which will ensure the functioning of the Federation of Bosnia and Herzegovina. “With today’s decisions, no party or anyone who is elected will be able to hold the entity Federation of BIH hostage. I expect joint efforts and constructive cooperation,” he said.

Croatian Prime Minister Andrej Plenković welcomed the changes to the electoral law of Bosnia and Herzegovina, and the delegation of the European Union announced today that it was solely the decision of the High Representative.

The changes introduced by Schmidt were already welcomed by Croatian Prime Minister Andrej Plenković on Sunday evening. “We have always supported him in this, after the negotiations between the political actors in BiH failed,” Plenković announced via the Twitter social network. The Croatian Prime Minister added that the changes ensure the political survival of Croats in BiH and contribute to ensuring their legitimate representation in the House of Nations of the Parliament of the Federation of BiH and in the government of this Bosniak-Croat entity.

The elections in Bosnia and Herzegovina were monitored by around 60,000 observers, including almost 4,000 international observers. They recorded several incidents, irregularities and an attempt at major electoral fraud. The Coalition for Free and Fair Elections Under the Scrutiny has announced that it has identified 65 serious violations of the BiH Election Law.

The deadline for publishing the final and official results is 30 days from the election day. After the announcement of the official results, the second phase of the election process will follow, in which representatives to the House of Nations of the Parliament of BiH and the Federation of BiH, as well as the president and two vice-presidents of this entity will be indirectly selected.

Previous article
The updated version of David Bowie’s fourth album will be full of new material
Next article
Powdered: A Provocative 20th-Century Opera Classic About an Adulterous Aristocrat