Ankica Tuđman, the wife of the first Croatian president, has died 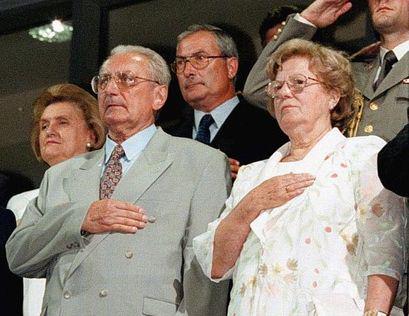 Ankica Tuđman, the widow of the first Croatian president, Franjo Tuđman, died in Zagreb at the age of 97. The former first lady of Croatia and the “wife of the founder of modern Croatia” were also saddened by the ruling HDZ party.

Ankica Tuđman, whose name was Žumbar before her marriage, was born on July 24, 1926 in Zagreb, where she also finished elementary school and attended a catering school, and then interrupted her studies in May 1944 to join the partisans.

She met Franjo Tuđman at the age of 18 and married him in 1945. In marriage, they had two sons, Miroslav and Stjepan, and a daughter, Nevenka. The older son Miroslav was a member of parliament, but he died last January as a result of covid-19.

Ankica Tuđman also supported her husband in his political activities. She has been a member of his HDZ party since its founding in 1989. At the beginning of this millennium, she was expelled from membership by the party’s president at the time Ivo Sanader, his successor Tomislav Karamarko however, he returned her membership in 2012.

Ankica Tuđman’s life, in addition to the charity fund for children that she managed, was also marked by some affairs. One of the biggest was when the Croatian newspaper Morning paper in 1998 revealed that the president’s wife had 210,000 German marks and 15,000 US dollars in Zagrebačka banka, which Tuđman did not list in his financial statement. The information was disclosed to the newspaper by bank employee Ankica Lepej, who lost her job as a result, and was also charged with disclosing confidential information. The State Prosecutor’s Office abandoned the prosecution after Tuđman’s death in 1999.

The last time Ankica Tuđman found herself in the media was a Croatian portal Pension revealed that she is one of the pensioners with the highest pension in Croatia. She is supposed to receive more than HRK 25,000, or approximately EUR 3,500 per month, which was also confirmed by the president of the Union of Pensioners of Croatia Jasna A. Petrović.

Previous article
Fifa: Slovenia advanced by two places, on top of Brazil
Next article
On Wednesday, 2,559 infections with the new coronavirus were confirmed