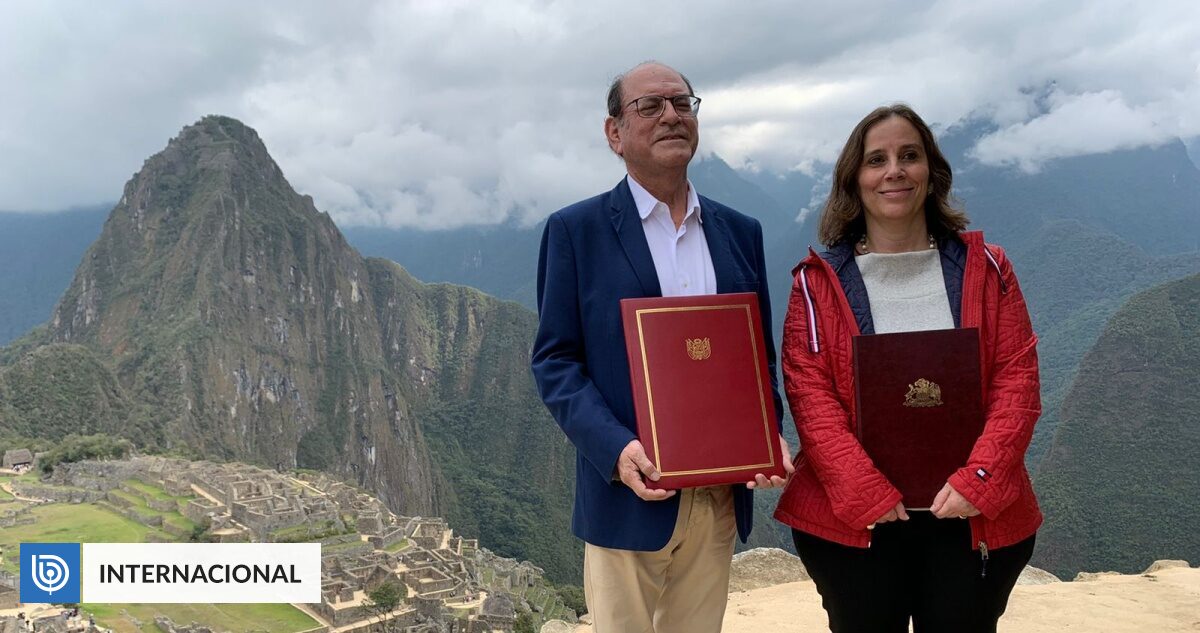 At Machu Picchu, Chilean and Peruvian foreign ministers signed a proclamation celebrating a poem written by Pablo Neruda about the Inca citadel. All this to celebrate his 200th anniversary of bilateral relations. Additionally, they confirmed the Fourth Presidential and Bilateral Ministerial Conference to be held in Santiago, Chile on November 28 and 29.

Minister of Foreign Affairs of Peru, Cesar Landa and counterparts from Chile, Antonia Urehora signed a proclamation this Sunday celebrating Pablo Neruda’s poem dedicated to the Inca citadel. machu picchu It also highlights the 200th anniversary of bilateral relations and their cooperation.

Peru’s foreign ministry said the minister unveiled a plaque with a line from the poem. “Height of Machu Picchu” Laureate of the Chilean Nobel Prize in Literature, in the Manuel Chavez Barón Ruins Museum in the Inca Sanctuary.

“Since its publication in 1950, These verses have been translated and reproduced countless times. In this way, in a place full of history, no one had any doubts,” commented Minister Urehora.

“This symbolic act shows that our convergence is not only the product of a rich past of common interests, but today they are emerging as the foundations on which we collectively face them. Present and Future Issues” he added.

Likewise, they signed a declaration celebrating Neruda’s literary work and highlighting the 200th anniversary of diplomatic relations between Peru and Chile.

During the meeting, in the southern Andean region of Cusco, Landa and Urrejora IV Presidential Conferences and Bilateral Cabinets It will be held in Santiago from November 28th to 29th.

Over the next two days, the two governments will adopt “new commitments aimed at deepening integration for the benefit of the peoples of both countries,” according to the Peruvian Ministry of Foreign Affairs.

until now Three Presidential and Bilateral Ministerial Meetings Held Between Peru and Chile since the beginning of 2017, followed by 2018 and 2019, which have been suspended for the past two years due to the covid-19 pandemic.

The fourth meeting was held in Colombia last August and confirmed that a delegation of the Peruvian government attended the installation of Colombian President Gustavo Petro.

At that time, then Peruvian Minister of Foreign Affairs Miguel Ángel Rodríguez Mackay and Urrejora announced October 13. “Peru-Chile Friendship Day” To deepen the ties between the two countries.

Not able to attend Petro’s inauguration was Peruvian President Pedro Castillo, who was denied by Congress the permission that the Andean country’s ruler must obtain from Congress to travel abroad.

The army and police warned Castillo against violating the constitutionIn Peru, Congress voted to impeach President Pedro Castillo and called on Vice President Dina...
Previous article
‘Nothing’: Colo-Coro Penalty Leaves Multiple Questions Among Fans
Next article
Gay soccer player Josh Cavallo has stoned Casillas and Puyol for tweeting that he was “disrespectful”.