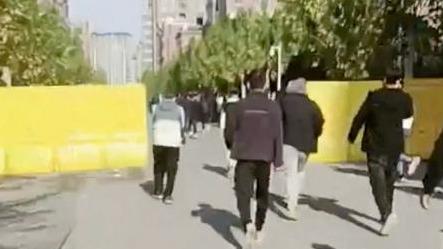 Violent protests have erupted around China’s largest iPhone smartphone factory, which is owned by the Taiwanese company Foxconn, with employees clashing with security personnel. The reason is said to be strict measures against covid-19.

Videos from Zhengzhou that circulated on Weibo and Twitter showed hundreds of workers marching down the road in broad daylight, with some confronted by police and staff in protective suits. Another video showed broken covid-19 testing booths and an overturned vehicle.

The video, which was taken at night, shows a man with a bloodied face and can be heard in the video: “They hit people, they hit people. Do they have a conscience?”

French news agency AFP partially verified the video using geolocation, which showed recognizable features, including a building and barricades near staff quarters in the factory complex.

One of the videos shows several fire engines, surrounded by police in protective suits, parked near apartment blocks. At the same time, a voice over a loudspeaker could be heard urging workers to return to their living quarters and not to associate with “a small minority of illegal elements”.

Key on the Weibo social network Foxconn riots or. The Foxconn riot was censored on Wednesday, but some posts relating to widespread protests at the factory remained accessible.

Neither Foxconn nor Apple responded to AFP requests for comment on the riots.

Strict measures against the spread of covid-19

China, as the last major world economy, insists on zero tolerance for covid. To limit the spread of the virus, it is still conducting mass testing and ordering long-term quarantines. This is causing fatigue and discontent among large sections of the population, some of whom have been locked up in factories and universities for weeks or unable to travel freely.

Foxconn, also known by its official name Hon Hai Precision Industry, is the largest electronics contract manufacturer in the world, assembling accessories for many international brands. The Taiwanese company is, among other things, one of the main suppliers of the American technology giant Apple.

Foxconn recently saw a spike in Covid-19 cases at its plant in the Chinese city of Zhengzhou, prompting the company to shut down the sprawling complex to contain the spread of the coronavirus. The factory is considered a city within a city, employing around 200,000 people. In addition to iPhones, they also produce other technological equipment.

Earlier this month, videos of panicked workers fleeing the factory area en masse in light of accusations of poor working conditions circulated online. Several employees later described scenes of chaos and disorder at the complex to AFP. There are said to be no suitable medical facilities in the area.

The company offered high bonuses and other incentives to the employees who remained, while the local government brought in new workers to prevent the factory from collapsing.

At the beginning of the month, the American company Apple had to limit the production of the latest smartphone models due to strict anti-coronavirus rules in China, which will affect the supply. Before the upcoming Christmas shopping season, the company announced that consumers will have to wait a little longer for the iPhone 14 pro and 14 pro max models.

Stoltenberg: Russia is trying to freeze the fighting in Ukraine before the spring offensive

Clashes are likely to continue at a reduced pace in the coming monthsNATO Secretary General Jens Stoltenberg has warned that Russia will seek to...
Economy

The final report of the year reiterates that 2023 will be negative and that Chilean inflation will normalize in 2024.