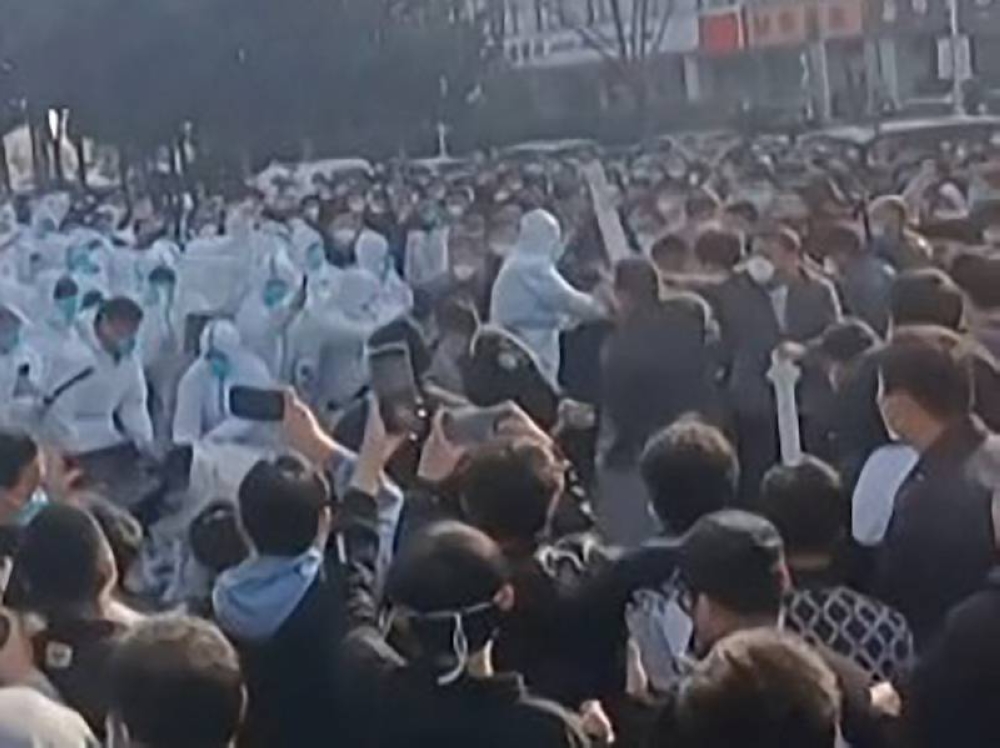 China has ordered the detention of six million people in Zhengzhou, home to the world’s largest iPhone phone factory, where violent protests erupted over labor wages and quarantine conditions.

The Asian giant’s restrictive ‘zero covid’ strategy has been hampered by multiple outbreaks in the country, with the pandemic hitting its highest daily number of infections on Thursday.

Fear of continued measures has led to demonstrations like hundreds of workers at that factory in Zhengzhou, clashing with riot police with protective gear and batons on Wednesday.

Amid the unrest, city officials have ordered massive population checks and confinement of several districts of the city in central China from Friday. Residents of the city center cannot leave the area if they have tested negative for COVID-19 and have not obtained permission from the authorities. In addition, they cannot leave their homes “unless necessary.”

The restrictions affect more than 6 million people, almost half of Zhengzhou’s population, but do not cover areas where iPhone factories are located, and workers have been restricted for weeks.

An employee told AFP on condition of anonymity that the protest stemmed from a dispute over a bonus payment promised by Taiwanese technology giant Foxconn. According to their version, Foxconn promised them an additional payment of his 3,000 yuan ($420), but they only received his 30 yuan.
Additionally, many workers complained about the “chaotic” living conditions inside the factory, the sources added.

The Taiwanese company apologized to its employees on Thursday, blaming the problem on a “technical error” in its payroll system. “We will do our best to address reasonable concerns and requests,” he said.

Meanwhile, US giant Apple, whose main product is the iPhone, told AFP on Thursday it has a representative there. The California company has “reviewed the situation and is working closely with Foxconn to ensure employee concerns are addressed,” he said.

The measures taken in Zhengzhou are part of China’s “zero covid” strategy to eradicate the virus from its territory through lockdowns, travel restrictions and mass testing. But after nearly three years of the pandemic, covid-19 cases in the country are higher than ever.

With a population of 1.4 billion, this figure is low, especially when compared to the rest of the world’s balance at the peak of the pandemic, and these outbreaks have caused multiple restrictions within the country. The ambiguous and variable nature of these measures and their impact on the world’s second-largest economy are taking a toll on the population.

Several cities such as Beijing, Shanghai, Guangzhou and Chongqing have tightened restrictions due to rising cases. The capital now requires a negative covid test within the last 48 hours to enter any shopping center, hotel or public building.

Thousands of wards have been built to house patients at manufacturing centers in Guangdong (Southern) province, where one-third of the country’s cases have been detected.

This tightening in multiple locations comes on the heels of the central government announcing measures that signal a cowardly reopening, including reducing quarantine requirements for travelers arriving in the country.

But even Beijing’s neighbor Shijiazhuang, which was considering pilot-testing a reopening strategy, canceled most of the mitigation measures it ordered this week.

“The road to reopening could be slow, costly and disruptive,” Tin Lu, chief China economist at Japan’s Nomura Bank, said in a report.

Slovenia's unilateral declaration regarding arbitration will have no legal effectThe EU's interior ministers will decide on the inclusion of new countries in the Schengen...
Entertainment

The most fatal man of the year is actor Rok Vihar

A selection of readers of Obrazi/Avenija magazineDrama and television actor Rok Vihar is the most fatal man of the year ending according to the...
Opinion