With new Russian attacks on infrastructure, the cost of Ukraine’s post-war reconstruction continues to rise 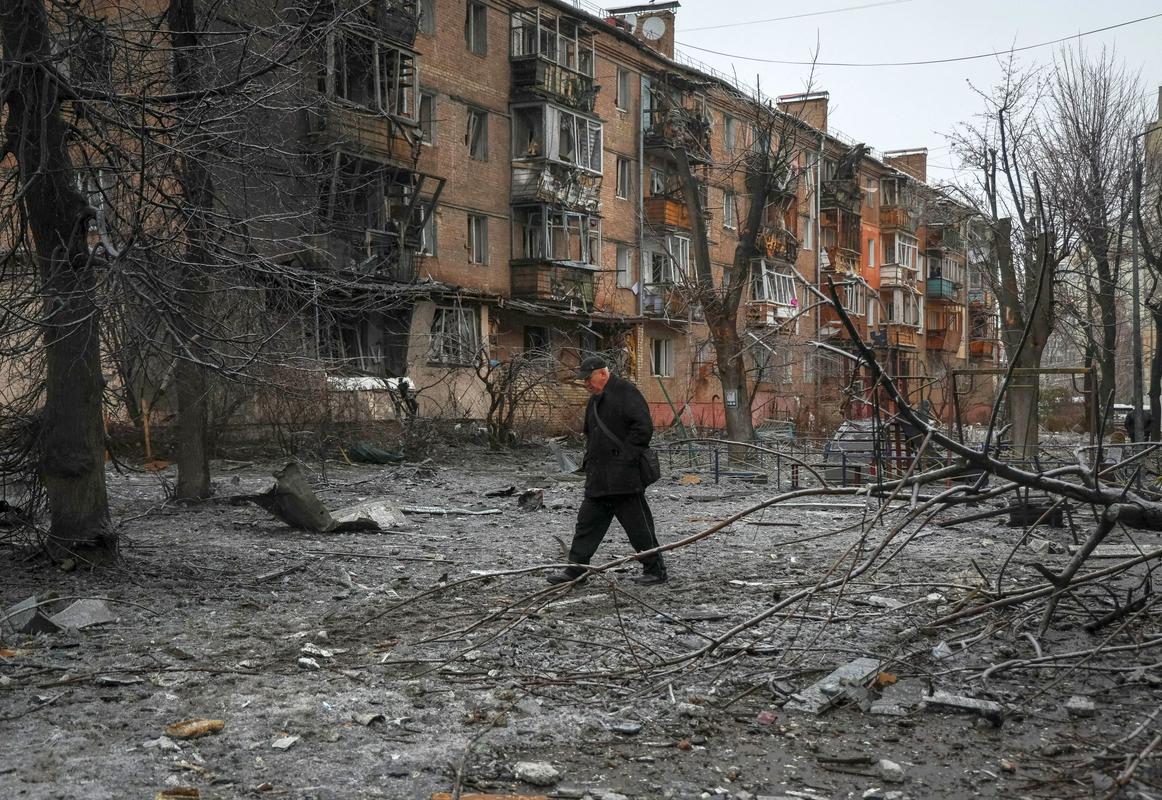 Kyiv is calling on the West to increase aid for Ukraine’s rising post-war reconstruction costs, especially after new Russian attacks on critical infrastructure in the past week, while the European Parliament approved an 18 billion euro new loan.

If in August the World Bank estimated that the costs of the post-war reconstruction of the physical infrastructure in Ukraine would amount to 105 billion dollars, three months later, according to Ukrainian Finance Minister Serhii Marchenko, this number had increased, especially due to violent Russian air attacks on the energy infrastructure.

“Unfortunately, this number is increasing every day and will increase significantly in the worst case,” he said in an interview with Reuters. In some European circles, it is estimated that the entire reconstruction of Ukraine after the war, which has been going on for ten months, will cost more than one thousand billion euros.

These funds will be tied to Kyiv’s commitment to fighting corruption in the country and implementing judicial reform. The loan must be unanimously approved by the Council of the EU at the beginning of December.

According to the proposal of the European Commission, the money will be used to cover its key current costs, especially public services, such as the operation of hospitals, schools and the provision of housing for resettled people.

“Ukraine must know that it can count on European support for as long as necessary. The EU is ready to provide regular and predictable financial assistance that will help cover a significant part of Ukraine’s direct financial needs until 2023,” said the MEP, rapporteur for Ukraine, Sandra Kalniete (EPP), when the loan was approved today.

Since the beginning of the war, the European Union and its member states have already provided 19.7 billion euros to support Ukraine, a large part of which was in the form of macro-financial assistance, approved by the European Parliament in September and July.

In addition, the President of the European Parliament, Roberta Metsola, presented the campaign on Wednesday Generators of hopewhich aims to provide Ukraine with electricity generators that will help Ukrainians survive the winter due to constant Russian missile attacks on energy infrastructure.

Russia announced today that Kyiv has every chance to meet Moscow’s demands and end the suffering of the people of Ukraine.

The European Union is preparing the ninth set of sanctions against Russia, European Commission President Ursula von der Leyen said during her visit to Finland, and at the same time expressed her belief that, together with the G7 group and other important partners, they will soon introduce a price cap for Russian oil.

“We are working hard to hit Russia where it hurts and limit its capacity to wage war against Ukraine,” said von der Leyen at a joint press conference with the Prime Ministers of Finland and Estonia and the Deputy Prime Minister of Sweden.

“We will not rest until Ukraine wins over Putin and his illegal and barbaric war,” she also said about the Russian president.

She described Russian attacks on Ukrainian civilian infrastructure as a war crime and warned that many Ukrainians will be without electricity and running water in many places this winter.

“But I also know that our Ukrainian friends will overcome this tragedy. And we, the European Union, will stand by them in these very difficult times for as long as it takes,” she added.

Last month, the EU approved the eighth package of sanctions against Russia, which includes, among other things, a legal basis for the introduction of a price cap on Russian oil and an expanded list of individuals and legal entities subject to sanctions.

After a new wave of Russian missile attacks in Ukraine, which caused massive blackouts, Ukrainian President Volodymyr Zelensky accused Russia of crimes against humanity via video link at a meeting of the Security Council.

According to the BBC, Zelensky said that she was Russian “terror formula” forced “millions of people to live without energy supply, without heating, without water” in sub-freezing temperatures.

At least seven people were killed in the latest attacks, Kyiv said. All three Ukrainian nuclear power plants, which are under the control of the Ukrainian authorities, were also disconnected from the grid. The Zaporozhye nuclear power plant, which is under Russian control, however, was once again forced to use diesel generators to power cooling systems and key safety equipment.

French President Emmanuel Macron announced that Russian attacks on civilian infrastructure constitute a war crime, and the United States also announced the same. On Wednesday, the European Parliament adopted a resolution that designated Russia as a country that sponsors terrorism and uses terrorist means.

Russia is escalating attacks on Ukraine’s energy infrastructure. Ukrainian authorities report that these attacks have caused massive damage, with more than half of Ukraine’s network in need of repair.

Mayor of Kyiv Vitaliy Klitschko said that at least 80 percent of the capital’s residents were left without electricity or water. Zelensky said that some other cities that were targeted by Russian missiles had managed to restore electricity, including Lviv, Odesa and Cherkassy.

Kremlin spokesman Dmitry Peskov did not comment on the latest attacks, but said that the success “special operations”as Moscow calls the war in Ukraine, is not in question.

Russia announced the continuation of attacks in the UN

Russian Ambassador to the UN Vasilij Nebenzja assured an emergency meeting of the Security Council that Russia would continue its attacks on Ukraine until Kyiv accepted “realistic” approach to negotiations.

“One of the goals of the special military operation is to undermine the combat capabilities of the Ukrainian army. And we will achieve this by military means until the regime in Kiev takes a realistic approach that will allow to settle the problems that led us to launch the special military operation in the first place,” claimed Nebenzja, who again complained that Zelensky participated in the session via video link and said he would like to see him in New York live.

US Ambassador to the UN Linda Thomas-Greenfield is the Russian president Vladimir Putin accused of using winter as a weapon. She characterized the Russian attacks as “an inhumane strategy that punishes Ukrainian men, women and children”. In the south of the country, a newborn baby was killed in a maternity hospital hit by a rocket.

French Ambassador Nicolas de Riviere called the attacks on Ukraine’s energy system a clear violation of humanitarian law. “The goal is clear: to sow terror in the face of military defeats. We cannot tolerate the continuation of this,” said the Frenchman.

Russia was also condemned by some other ambassadors within the Security Council. There was no action because Russia has the right to veto.

Three nuclear power plants in Ukraine, which are still under the control of Kiev, have been reconnected to the electricity grid, the Ukrainian Ministry of Energy announced. After the Russian missile attacks on Wednesday, they were disconnected from the grid, but by the evening they should start producing electricity for consumers again.

“After yesterday’s extensive shelling, energy workers managed to unify the power system and reconnect the three nuclear power plants to the power grid by morning,” the ministry announced via social networks that the supply of electricity from these power plants should begin this evening.

According to Klitschko, the competent services on the left bank of the Ukrainian capital managed to restore the water supply, which was also interrupted due to the Russian shelling on Wednesday. Residents hope that the water will soon flow again on the right bank of the city.

Russian forces fired about 70 cruise missiles and also used drones at targets across the country on Wednesday, according to the Ukrainian military. Due to damage to the energy infrastructure, power outages occurred in several Ukrainian cities, and they were also reported from neighboring Moldova.

Ukraine and Russia exchanged 50 prisoners of war today. The exchange was first reported by the chief of staff of the Ukrainian president Andriy Yermak, and later it was also confirmed by the Russian Ministry of Defense.

“Today we returned 50 Ukrainian fighters from Russian captivity,” Jermak wrote on Tekegram, adding that among the Ukrainian prisoners of war were members of the national guard, border guards, sailors and soldiers.

Ukraine and Russia have conducted several prisoner exchanges since the beginning of the Russian invasion. According to the data of the Ukrainian Coordination Headquarters, a total of 1,269 Ukrainians have been released so far. The largest exchange so far took place at the end of September. At that time, Moscow handed over more than 200 Ukrainians to Kiev, including fighters from Mariupol and ten foreigners, in exchange for a close ally of the Kremlin, Viktor Medvedchuk, and 55 other prisoners.

Reuters: Unlike the US, China offers economic cooperation without political expectationsChinese President Xi Jinping arrived in Saudi Arabia, where he and Crown Prince bin...
World

Lila Moss – at the age of 20, the mother of Kate Moss was cut

Lila Moss among the nominees for model of the yearLila Moss is a cut-out image of her famous mom, Kate Moss. The 20-year-old...
World

Taliban carry out first public execution since returning to Afghanistan

Previous article
When you’re 1-0 up, you can’t stop
Next article
The Tyrant’s Banquet – El Mundo