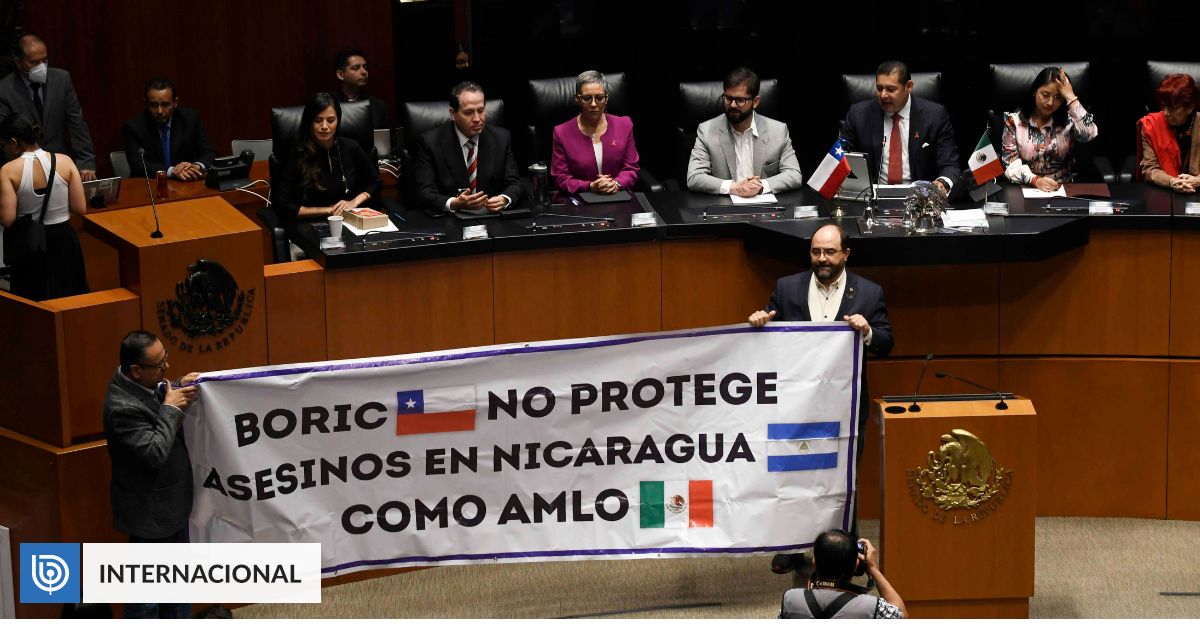 Gabriel Boric, a group of parliamentarians opposed to the government of Andrés Manuel López Obrador, held a canvas during the solemn session to host the visit of the President of the Republic to Mexico, stating: . Like AMLO. ” .

During President Gabriel Boric’s activities during his expedition to Mexico, The President intervened in the Senate of the Republic of this country.

The head of state’s speech was marked by his remarks relating to political prisoners in Nicaragua.

The President was applauded by Mexican members of Congress after delivering this message on the floor of the Senate of the Republic of Mexico. Just minutes after a group of legislators opposing the government of Andrés Manuel López Obrador displayed a white canvas with black lettering, “Bolić does not protect Nicaraguan killers like Andrés Manuel Lopez Obrador (AMLO).”

According to information collected by BioBioChile, the senators mentioned are Grupo Plural’s Germán Martínez Cazares, Gustavo Madero Muñoz and Emilio Álvarez Icaza. In this case, a group of independent parliamentarians made up of senators who have left various parties such as Morena and PAN.

This happened during a solemn meeting to receive the visit of the President of the Republic Gabriel Boric.

It’s worth mentioning that the President is scheduled to return to Chile tonight.

Boric declared in his speech to the Mexican Senate: It stated that “Latin America cannot be silent” in the face of human rights violations in the region and explicitly condemned the situation of “political prisoners” in Nicaragua.

This was stated by Boric in a speech at the solemn session of the Mexican Senate on the last day of his official visit to Mexico.

“I have learned that when human rights are being violated in a Latin American town, we must not remain silent. The solidarity we had with us is felt and beats in our Latin American hearts.

Boric’s remarks contrast with the silence of Mexican President Andrés Manuel López Obrador on the situation in Nicaragua.

It is worth mentioning that Mexico has not joined the majority of the international community’s condemnation from various international bodies, such as the Organization of American States (OAS), for political repression in the Central American country.

Nicaragua has been experiencing a deep political and social crisis since April 2018, exacerbated after the controversial general election on November 7, 2021. With his wife Rosario Murillo as vice president, his main candidate is in prison.

Ortega has been in power for 15 years and 10 months straight amid accusations of authoritarianism and electoral fraud.