At a meeting with mothers of Russian soldiers, Putin criticized “fake news” about the war 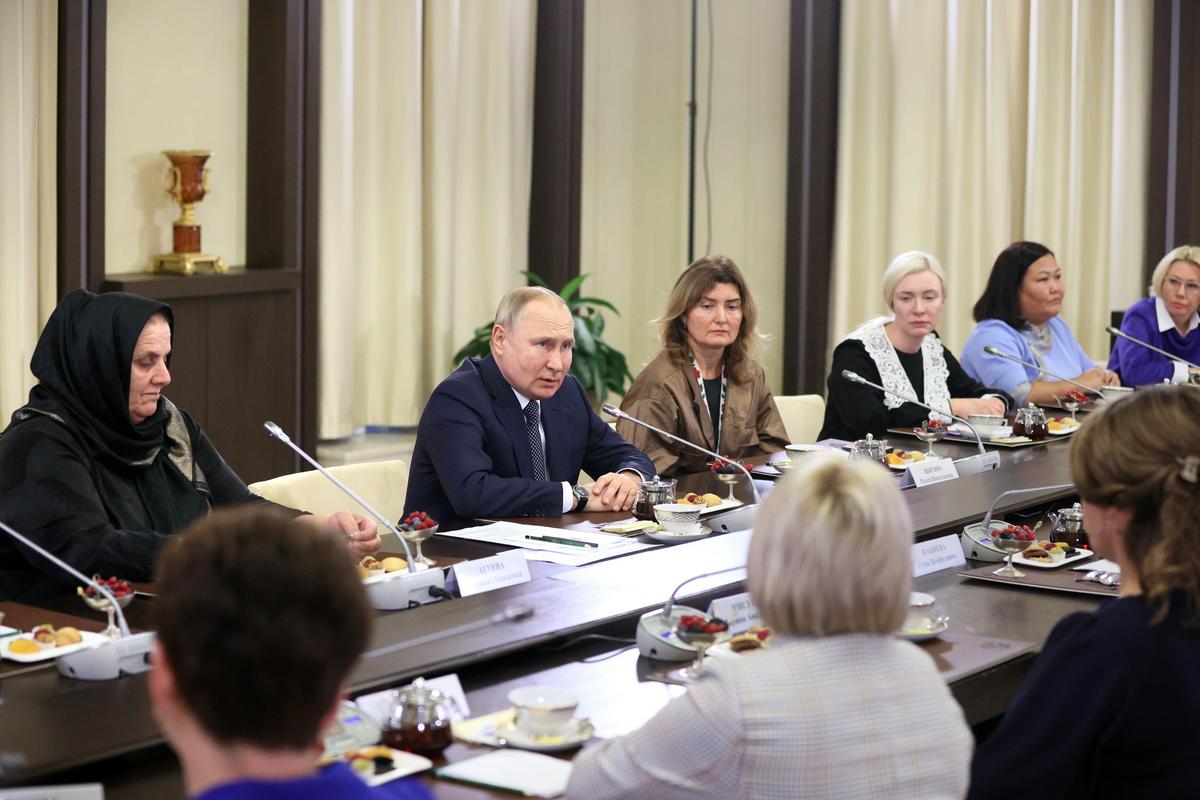 Angela Merkel: With the end of my mandate, I have run out of power to influence Putin

Vladimir Putin met with mothers of soldiers fighting in Ukraine before Mother’s Day and told them not to believe everything they see on TV and read online, as there is a lot of “fake news” about a “special military operation” circulating. .

In the meeting, which was also broadcast on state television, the Russian president also said that Russian leaders understand and share the pain of those who lost loved ones during the conflict in Ukraine. At the same time, he promised that he would not forget the indescribable suffering of the mothers who lost their sons in the nine-month long conflict.

“I would like you to know that I personally – and the entire leadership of the country – share your pain,” Putin told the crowd. “We realize that nothing can compensate for the loss of a son – especially for a mother. We share this pain with you.”

More than 10,000 soldiers on both sides have been killed or wounded in the war in Ukraine, according to US figures, and the Russian invasion has sparked the biggest confrontation between Moscow and the West since the 1962 Cuban Missile Crisis.

More than 100,000 Russian soldiers have been sent to the battlefields in Ukraine, including 300,000 reservists, who were called up in September as part of the general mobilization.

A. Merkel: I ran out of power to influence Putin

Former German chancellor Angela Merkel however, in an interview with the German magazine Spiegel, she defended her policy towards Russia before the attack on Ukraine, saying that with the end of her mandate she had run out of power to influence Putin.

Merkel said she tried to convene a conversation with the Russian president and the French president last summer Emmanuel Macron. “But I didn’t have the strength to do it my way. Everyone knew I was going to leave in the fall,” she said.

After four terms, Merkel finally left the chancellor’s office in December. She last visited Moscow in August of last year, when she says the feeling was “very clear: in a political sense, I was finished”. “And for Putin, all that counts is power.”

She also found it very telling that Putin brought the foreign minister to their last joint meeting Sergey Lavrov. Until then, they always met privately. Putin speaks fluent German, and Merkel also knows some Russian.

After Putin’s attack on Ukraine, which followed weeks of a military build-up on the border, many believed Merkel and other EU leaders should take a tougher line with the Kremlin. Foreign policy expert in Merkel’s Christian Democratic Party (CDU), Roderich Kiesewetter, is among those who say she knew Putin was trying to carve up and weaken Europe, but was convinced that “soft power” was the right approach. Before the invasion, he argued that Germany was too dependent on Russian gas.

In the interview, Merkel also said that her position regarding Ukraine in the Minsk peace agreement bought Kiev time to better defend itself against the Russian army. The peace agreement in Minsk was reached after the Russian annexation of Crimea in 2014 and the indirect war in the Donetsk Basin. But the key points, including disarmament and international control, were never implemented.

Merkel said she did not regret leaving because she felt her government had failed to make any progress on both the Ukraine crisis and the conflicts in Moldova, Georgia, Syria and Libya.

Kyiv residents have water again, many still without electricity

In the meantime, Ukraine has managed to re-establish water supply in the capital after Russia’s devastating rocket attack on critical infrastructure in the middle of the year, and work is also progressing elsewhere in the country. In Kyiv, half of the population is still without electricity, the mayor said Vitaliy Klitschko.

As he added, a third of the houses have heating again and experts continue to restore the network.“During the day, energy companies plan to alternately reconnect electricity to all customers,” announced the mayor of Kyiv, where 70 percent of the population was initially without electricity after the rocket attack.

According to the military administration in the capital, the water supply in Kiev has now been fully restored. Several parts of Kyiv were also initially without heating, internet and mobile phone network.

Ukraine has announced that 50 percent of the country’s electricity needs are currently not being met following large-scale Russian attacks. The electric company Ukrenergo announced that the priority is to repair the key infrastructure, but that the repairs are now taking longer. President Volodymyr Zelensky said that the situation with electricity and water supplies is most difficult in 15 regions, including the capital Kyiv.

Winter is slowly creeping into Ukraine, with snowfall and sub-freezing temperatures, leading to fears that people could be dying of hypothermia.

Ukrainian authorities have set up more than 4,000 emergency heated tents across the country where residents can charge their phones and have a cup of coffee or tea.

In a video address on Thursday, Zelensky said that Russian forces “do not know how to fight”. “The only thing they still master is terrorizing. Either terrorizing with energy or with missiles, that’s what Russia has been reduced to under its current leaders,” he said.

In the meantime, she is his deputy Irina Vereschuk told the BBC: “Terrorist Russia has launched an energy war against us, its goal is to create a huge humanitarian crisis. For us, the biggest challenge is the most vulnerable categories – the elderly, women with children and the sick. Our people must hold on for another 120 days, because these are winter days, Russia is counting on the winter months. It wants to inflict maximum pain on our people as they endure the winter.”

Olena Zelenska: We will survive

In a conversation with the BBC, she is the Ukrainian first lady Olena Zelenska said that despite the blackouts and the cold, Ukraine will survive the coming winter and will continue to fight “in the war of world views” because “there can be no peace without victory”.

“We’ve had so many terrible challenges, seen so many casualties, so much destruction that blackouts are not the worst thing that’s happened to us,” she said, citing a recent opinion poll in which 90 percent of Ukrainians said they were prepared for two to live with power outages for up to three years, if there were any prospects for joining the EU.

That seems like a long time, which Zelenska is aware of. “You know, it’s easy to run a marathon when you know how many kilometers are ahead of you,” she said. But in this case the length is unknown. “Sometimes it’s very difficult. But new emotions arise that help us survive.The First Lady also predicts that the war will strengthen all Ukrainians.

Demonstrations recorded in more than a dozen Chinese cities over the weekend presented an unprecedented challenge...
Previous article
The only point for the continental champions was the USA
Next article
Maribor Cathedral organist Tjaša Drovenik Adamec with creations by Hladnik and Reger