US to Russia condemn Brazil riots. The government condemned the attacks as “acts of terrorism”. 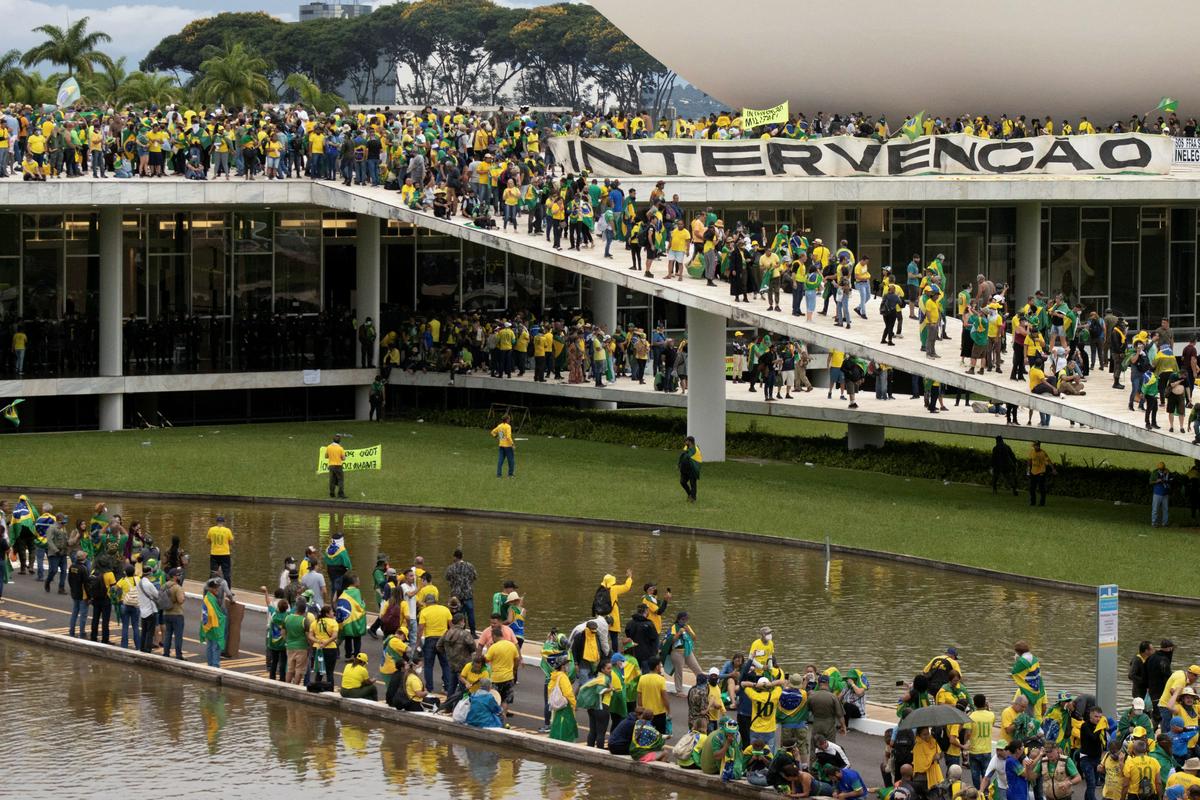 Supporters of former Brazilian President Bolsonaro stormed Congress, the presidential palace and the Supreme Court on Sunday. Security forces took control and arrested 200 people, and the authorities condemned the riots as acts of terrorism.

On Sunday afternoon, a crowd of several thousand “Bolsonarians” gathered in the square in front of the National Congress. They broke through the police barriers and entered the building. Later, they broke into the presidential palace and the Supreme Court.

They smashed windows in buildings, overturned furniture, destroyed artworks and stole the country’s original 1988 constitution. In their rampage, rioters also destroyed important works of art, including an important painting by Brazilian modernist artist Di Cavalcanti, which they stabbed at least six times. They also disarmed the security guards in the presidential palace.

One of the videos showed a crowd outside pulling a police officer off his horse and knocking him to the ground. The journalists’ union announced that at least 12 journalists were attacked during the riots. Some were beaten and threatened with firearms, while five were damaged or had their equipment stolen, including a photographer from the French news agency AFP, who was beaten and had his equipment stolen by protesters.

Three hours after the raids began, security forces announced that they had retaken control of all three buildings.

Lula announced the punishment of rioters

Minister of Justice Flavio Dino announced that approximately 200 rioters had been arrested. “This is terrorism, this is a coup. We are convinced that the majority of the population does not want dark times,” he said.

President Luiz Inacio Lula da Silva, who was visiting Sao Paulo during the attacks, condemned the “fascist” attack and announced the intervention of federal security forces in Brasilia. “These fascist fanatics have done something unprecedented in the history of this country,” said the 77-year-old left-wing politician, adding that the vandals will be caught and found out who finances them.

Both Lula and the presidents of both houses of Congress and the president of the Supreme Court condemned the attacks as acts of terrorism and called on Brazilians to defend peace and democracy.

In a rare joint statement posted by Lula on Twitter, the three branches of government said they “reject the terrorist acts of vandalism by criminals and conspirators” who stormed Congress and the Supreme Court on Sunday afternoon after meeting at the presidential palace in the capital, Brasilia. and the presidential palace.

They stressed that Brazil needed “normalcy, respect and work” and urged residents to remain calm.

Inaction by the security forces

In Brazil, they are wondering how a frenzied crowd was able to destroy three of the main buildings of the Brazilian government and carry out an eight-kilometer march through the city without decisive action from the security forces.

The crowd of protesters was even escorted by military police cars with flashing lights when they arrived in front of the National Congress. The anti-riot police then arrived at the scene only two hours after the incursions began and intervened with tear gas.

The Supreme Court suspended the governor of Brasilia

President Lula also condemned the actions of the local military police, who did nothing to prevent the incursions. Many blame the inaction of the security forces on the governor of Brasilia To Ibaneis RochaBolsonaro’s ally.

The Supreme Court suspended the governor for 90 days. Judge Alexandre de Moraes said Rocha had been “painfully silent” about Sunday’s events. Rocha apologized for not being able to prevent riots.

Rocha fired the head of public security in the capital after the riots Anderson Torres, who was previously Bolsonaro’s Minister of Justice. The attorney general’s office said it had asked the Supreme Court to issue warrants for the arrest of Torres and all other public officials for dereliction of duty before the riots broke out.

They had been planning the attacks for two weeks

Minister of Justice Flavio Dino announced an investigation to find out who financed hundreds of buses to transport Bolsonaro’s supporters. Due to the unresponsive security forces, an investigation will also be launched against Governor Rocha.

The occupation of government buildings has been planned by Bolsonaro’s supporters on Telegram and Twitter for at least two weeks, Reuters reports.

Supreme Judge de Moraes ordered the social networks Facebook, Tik Tok and Twitter to stop the spread of “coup propaganda”. Meta, the company that combines Facebook, Instagram and WhatsApp, said it had called the attack on Congress a “violent event” and would remove and disable all content related to the event.

Brazil’s President Lula, who was sworn in on January 1, blamed the hack on former President Bolsonaro, who fired up his supporters with unsubstantiated allegations of voter fraud after an October election in which Lula won a narrow 50.9 percent second-round majority votes.

Bolsonaro, who flew to Florida in the US 48 days before the end of his term, rejected accusations that he had incited the attacks, tweeting that the peaceful demonstrations were democratic but that they had “crossed the line” by storming government buildings.

Condemnations of the attack from the US to Russia

The attack on government buildings in Brasilia, which recalled the attack by supporters of the former US president Donald Trump at the Washington Capitol two years ago, was quickly condemned by many world leaders.

“This is a big concern for us defenders of democracy,” tweeted the President of the European Commission today Ursula von der Leyen and expressed full support for President Lula da Silva, who was “elected freely and fairlyThe German chancellor also condemned the “attack on democracy”. Olaf Scholz and French President Emmanuel Macron.

“Brazil’s democratic institutions have our full support, the will of the Brazilian electorate must not be undermined.” the US president also condemned the attack Joe Biden. The leaders of the United Kingdom, Italy, France, Spain and India also joined in the condemnations.

Among the first to condemn the attack were the leaders of South American countries, the Colombian president Gustavo Petro and the Chilean president Gabriel Boric.

Kremlin spokesman Dmitry Peskov said that Russia “in the strongest terms” condemns the actions of those who incited the riots and “absolutely supports Brazilian President Lula da Silva“.

The Chinese Foreign Ministry also announced today that they strongly oppose the violent attack on government buildings in the Brazilian capital. Beijing supports the measures that “adopted by the Brazilian government in order to calm the situation, restore social order and protect national stability“.

Youth book, 2022Members of the medical guild are in many ways a special professional group. Many face the fine line between life and...
Previous article
The announced doctors’ strike may be averted by Tuesday’s mediation
Next article
State Individualism and Selfishness in Pandemic Management