14 victims in the helicopter crash, including the Ukrainian interior minister. Putin has no doubts about Russia’s victory. 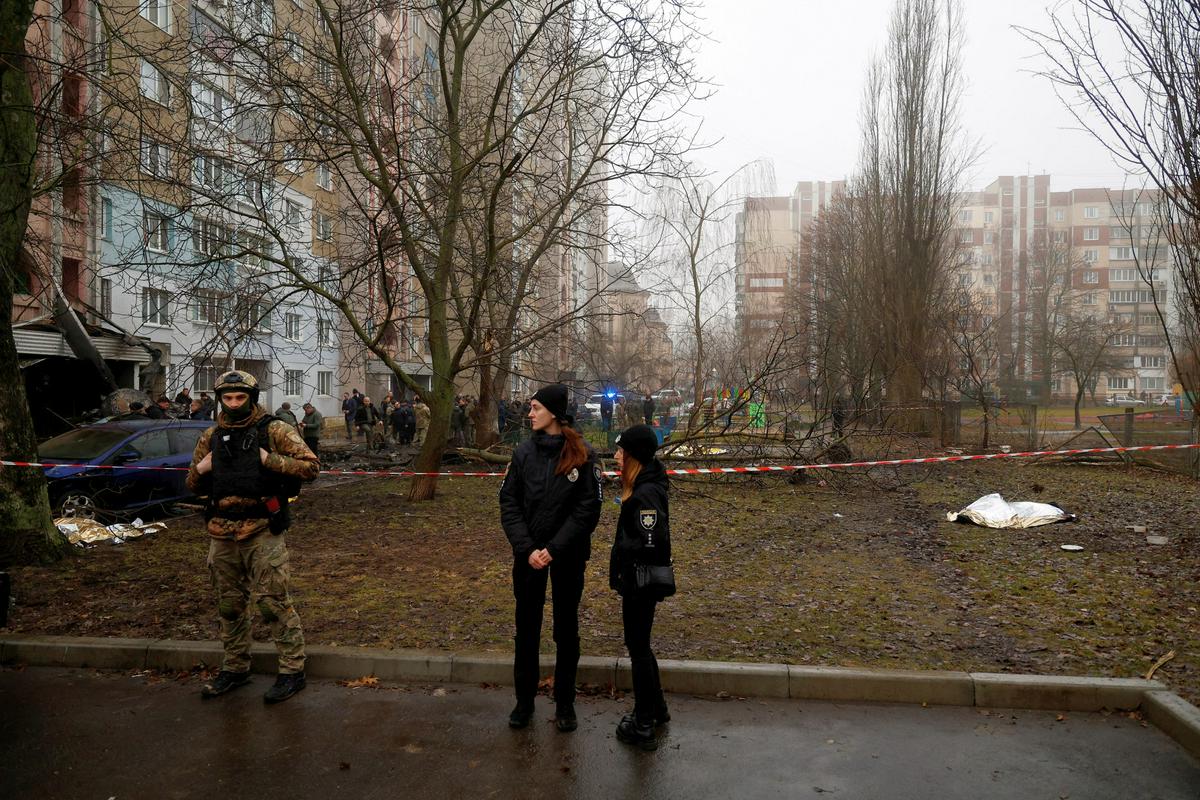 A helicopter crashed in the Ukrainian city of Brovari, not far from Kiev. At least 14 people died in the accident, including Ukraine’s interior minister, his deputy and three children. Russian President Putin said that he had no doubts about Russia’s victory in the war.

“Today, a terrible tragedy occurred in Brovari in the Kyiv region. An SES (State Disaster Response Service) helicopter crashed, and a fire broke out at the crash site. The pain is indescribable,” Zelenski wrote on social networks. “May all those whose lives were taken this dark morning rest in peace,” he added.

Deputy Head of the President’s Cabinet Kirill Tymoshenko announced that 16 people had died and 30 had been injured, including 12 children. “A great loss. Sincere condolences to the families of all the victims,” wrote the Ukrainian Prime Minister Denis Šmigalj.

Brussels also reacted to the tragic event. Ursula von der Leyen expressed her condolences to the families of the victims, Zelenski and the entire country on Twitter. Similarly, the President of the European Council Charles Michel, calling Monastirski “a great friend of the EU”.

The President of the Slovenian Government also responded Robert Dove. He announced that the tragedy in Brovary had deeply shaken him, he expressed his condolences to the families of the victims, Zelenski and Šmihal, and reiterated that Slovenia continues to stand by Ukraine and its people.

Slovenian Foreign Minister Tanja Fajon called the accident a terrible tragedy and said she was saddened by the loss of so many lives. “My thoughts are with the families of the victims, and I wish the injured a speedy recovery,” she wrote and expressed her wish for peace to reign in Ukraine as soon as possible.

They also responded to the accident on the Island. British Home Secretary Suella Braverman described Monastirski as a “leading figure” in the fight against Russian forces. She added that Britain will always support its Ukrainian friends.

Putin has no doubts about Russia’s victory in Ukraine

Russian President Vladimir Putin but today he stated that he has no doubt that Russia will win the war in Ukraine. As he said, the victory will be ensured by the unity and solidarity of the Russian people, the courage and heroism of the Russian soldiers and the Russian military industry. “We have something to rely on,” he added during a visit to the Russian missile company Almaz-Antey in St. Petersburg, where he went in light of the 80th anniversary of the end of the siege of the former Leningrad.

According to him, the Russian military industry, in addition to the unity and solidarity of the Russian people, the courage and heroism of the Russian soldiers, is what Russia can rely on to bring it victory. As he said, Russian companies produce about as many missiles as all the countries of the world combined, so victory is “inevitable”.

The Russian president once again defended Moscow’s goals in Ukraine. “We claim quite rightly that we are fighting neo-Nazism,” he said, accusing Kyiv of worshiping the Ukrainian nationalist leader Stepan Bandera. He also said that since 2014, Russia has been working towards a peaceful solution to the war in eastern Ukraine, but this, he said, was not possible.

Putin could otherwise announce a new mobilization of reservists for the war in Ukraine in the coming days, according to experts from the research Institute for the Study of War (ISW).

Ukrainian and Western intelligence services have repeatedly warned of the possibility of a new mobilization in mid-January, according to ISW, which, citing Russian bloggers, also stated that Putin could officially declare the invasion of Ukraine a war. Moscow still describes the invasion of Ukraine as a special military operation, while the use of the term war is prohibited under Russian criminal law.

As part of the first mobilization, Moscow called up 300,000 reservists last year, and the Russian authorities emphasized at the time that any future increase in Russian troops would be based only on volunteers and professional soldiers and not on the mobilization of reservists.

Russian Defense Minister Sergei Shoigu meanwhile, on Tuesday announced a restructuring of the military to accommodate the Kremlin’s demand for an increase in Russian troop numbers. Just before the new year, Putin announced that the number of Russian soldiers would increase from 1.15 million to 1.5 million in the future.

NATO: Putin is preparing for a long war in Ukraine

NATO is convinced that the Russian invasion of Ukraine will not end soon and that Putin is preparing for a long war, NATO’s Deputy Secretary General said at the start of the two-day meeting of the NATO Military Committee Mircea Geoana. At the same time, he reiterated that they will continue to support Ukraine as long as it is necessary.

Geoana is convinced that in order to strengthen NATO’s capabilities, members will have to increase budget expenditures for defense, expand the production of weapons and ammunition, and make better use of new technologies such as artificial intelligence.

NATO’s defense budget target of two percent of GDP, set almost a decade ago, is now increasingly seen as a lower limit. Many members are working to set new goals at the next regular summit in July.

The Netherlands will also supply the Patriots

Dutch Prime Minister Mark Rutte is after a meeting with the US president Joe Biden announced that the Netherlands will offer Ukraine the Patriot air defense system, joining the US and Germany, which have already promised advanced anti-missile systems.

During a visit to the White House, Rutte announced that the Netherlands would provide Ukraine with additional aid worth $2.5 billion, including Patriot anti-missile systems, which Kyiv has long wanted to defend against Russian airstrikes.

Before the visit, Rutte tweeted that he had spoken with Ukrainian President Volodymyr Zelensky before his trip to Washington, stressing that the horrific attack on civilians in the Dnipro clearly shows why Russia must not be allowed to win the war. For this reason, they will continue to coordinate military aid to Ukraine.

President of the European Commission Ursula von der Leyen speaking to CNN at the meeting of the World Economic Forum in Davos, she said that Western allies must speed up military aid to Ukraine.

“Ukrainians are resisting and will continue to resist, and the EU will continue to support them as long as necessary,” said Michel in the Parliament in Strasbourg. “They urgently need more equipment, I personally support the delivery of tanks to Ukraine,” he said in the discussion on the conclusions of the December EU summit, at which the leaders of the member states also talked about further assistance to Ukraine in its fight against Russian aggression.

On Wednesday, the chiefs of general staff of the Ukrainian and American armies met for the first time in Poland Valerij Zaluzhni and Mike Milley. Zaluzni announced on Facebook that he “thanked General Milley for the unwavering support and assistance of the United States and Ukrainian allies.” He also emphasized the “urgent needs of the Ukrainian army to speed up the victory”.

The two leaders met ahead of a meeting of the contact group for Ukraine, which will be held in Ramstein, Germany on Friday and will also be attended by Ukrainian representatives.

On Monday, however, Ukrainian soldiers arrived in Oklahoma, USA, and will begin training in the use of the Patriot anti-missile system, which was promised to Kiev by the USA.

Already last week, Putin is said to have submitted a bill to the Russian Duma condemning the Council of Europe’s criminal law convention against corruption and announcing that Moscow intends to renounce its full membership in the Group of States to Fight Corruption (GRECO).

On March 16 of last year, due to its aggression against Ukraine, Russia was officially excluded from the Council of Europe, of which it had been a member since 1996. In September, the European Convention on Human Rights officially ceased to apply to Russia, but thousands of court proceedings against Russia, which were filed even before the official exclusion from the Council of Europe.

Under the Convention, Russia remains contractually bound to implement these awards. The Russian authorities have already announced that they will not take them into account.