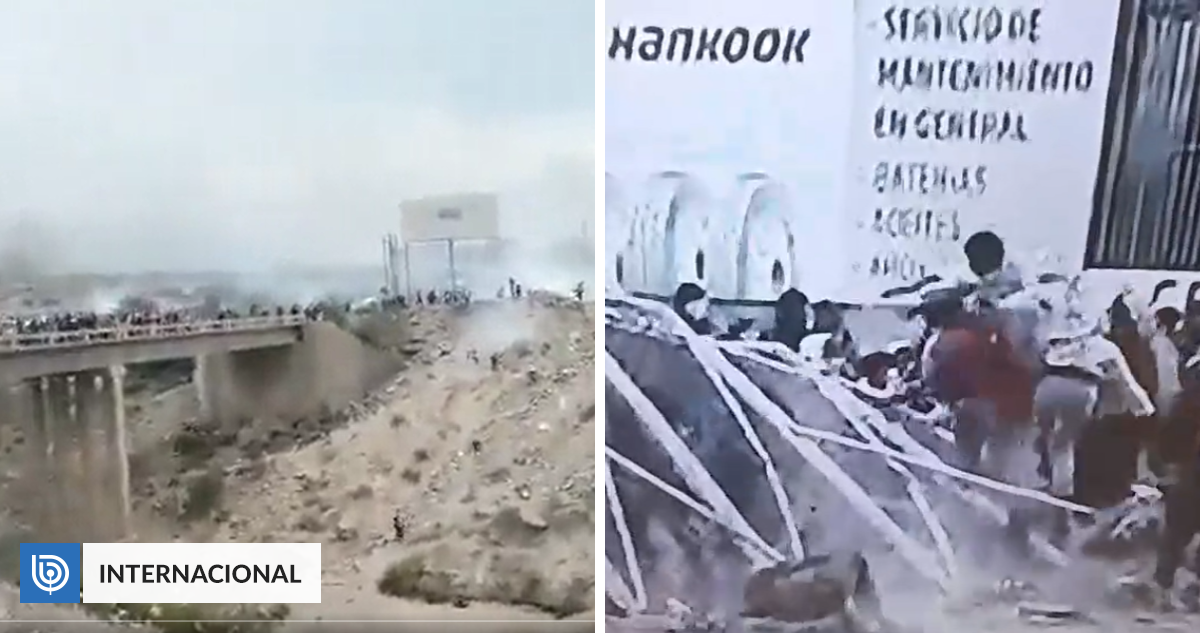 Hundreds of protesters tried to enter Alfredo Rodríguez Barón Airport in Arequipa (Peru) this Thursday amid demonstrations against the government of Dina Boluarte. Three people were reported injured.

Hundreds of protesters tried to enter facilities at Arequipa airport this Thursday the second most populous city in Peru.

Operations at the venue were suspended this morning as a precaution against anti-government demonstrations that have killed more than 50 people in total.

People tried to break into Alfredo Rodriguez Barón Airport and break down the metal fence around the airport terminal, but police responded by firing tear gas canisters.

Hours earlier, the Department of Transportation and Communications announced the closure of the airport “to protect the integrity of the public and the safety of air operations.”

It must be remembered that Peruvian President Dina Boluarte last Tuesday called on hundreds of protesters who had gathered in Lima from different regions to resign and to express their demands peacefully and calmly. .

“I know they want to take Lima from everything that’s coming up on the network on the 18th and 19th. I call on them to take Lima. Yes, I am waiting for you at the Government House so that we can talk about any social issues you have,” Boruarte said in an official statement.

The violence around Arequipa airport began at noon, when a large group of protesters who joined a national strike this Thursday attempted to tear down the terminal’s security fence.

Since anti-government demonstrations began in December, protesters have attempted to occupy airport facilities in various parts of the country, resulting in some facilities being shut down. Bolivia, and that of Arequipa.

Prior to the clashes near the airport, civil construction workers blocked one of the accesses to the so-called Ciudad Blanca at the height of the San Isidro Bridge and were confronted by police when agents arrived. The use of tear gas bombs, according to the RPP radio station.

#last minute | | Three people are reported to have been injured after 200 protesters broke into Peru’s Arequipa airport. About 200 demonstrators toppled the containment fence and forced their way inside as part of a protest against the Dina Voluarte government. pic.twitter.com/CuBQ3Qp4gQ

Following these clashes, Three protesters injured and referred to Arequipa Regional Hospital according to the aforementioned medium.

Demonstrations in Peru began on December 7, with Dina Boluarte taking office as the country’s president after a failed self-coup by former President Pedro Castillo (2021-2022), and after the Christmas truce, especially 1 It regained strength on the 4th of the month. in the south.

until now, Protests Kill 43 Demonstrators and 1 Police Officer Another 10 people, including unborn children, have died from various causes caused by roadblocks and demonstrations.

Protesters are demanding the resignation of President Boruarte, the closure of parliament, the advance of general elections to 2023, and the establishment of a Constituent Assembly.

And this… at Arequipa airport… a peaceful protest? pic.twitter.com/1bYn6r6Krw

Previous article
Felipe Contreras fired Commissioner Valdez: he helped him prepare for his role in the Game of Illusions
Next article
Dolly Parton will release her first rock album