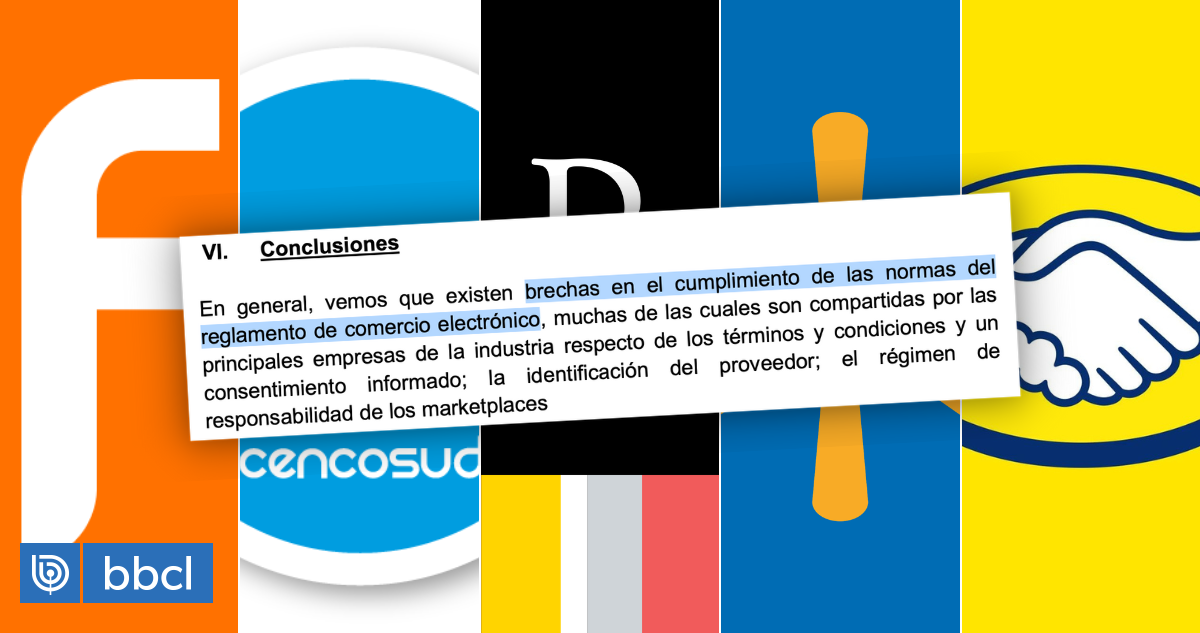 A study by Odecu found that the companies Falabella, Paris, Ripley, Ryder and Mercado Libre have been subject to e-commerce regulations in the transmission of tickets, the information published on their websites, and the origin and manufacture of the products sold. It became clear that I was breaking the rules. , among others. Find the best and worst rated below.

Chile’s big three retailers Falabella, Paris, Ripley, supermarket chain Rider and e-commerce company Mercado Libre they would have violated the rules of the e-commerce regulation According to a survey released on January 20 by Organization of Consumers and Users (Odecu).

“Citizen Surveillance New E-Commerce Ordinance” is the title of a study published by Odecu on January 20. The results indicate violations of the Terms of Use, Supplier Identification and Market Responsibility regimes .

When “hidden guest” Odecu said the investigation was carried out with the aim of “implementing civil surveillance under Decree No. 6 of the Ministry of Economic Development and Tourism.” at the same time, Validate compliance with regulatory requirements by e-commerce companies .

According to a statement issued by Odecu Chairman Stéphane Larenas, “Some of the most serious problems, and those that represent violations of the law, Incomplete identification of who is the seller of the product ”.

Of the total 12 points assessed in the retail survey, Falabella’s multinational chain celebrates 10th anniversary , two of which are partially visible. that way, is considered the second highest rated company in the survey Led by Odek.

For the two negatively categorized points, the first Odecu revealed: Difficulty accessing the terms and conditions section of the website The company’s foregoing, according to the association, “will affect regulatory compliance with the rules. “Clear, fast and timely access” ”.

Now, for the second of them, there is evidence of. Failed to send e-ticket , except for purchases made through the Application.On the other hand, when purchasing on the website, “hidden customers” I had to insist on receiving an electronic invoice for my purchase .

In relation to the Chilean chain Paris, which belongs to the multinational business consortium Cencosud, a survey of retailers found: 4 out of 12 rated non-compliance . among them, About the difference between website and mobile app .

“The information on the website looks clear and easy to understand, but the hidden client evaluated the opposite of the app. Thus, Consumer declares that it was unable to access the Terms and Conditions of Purchase in the App prior to purchase. ‘ said the study.

Similarly, regarding the distribution of information online, Odecu writes that “even though the information is complete, it is not always easily accessible.” This is explained by the time spent, clicks and windows opened before accessing the required information. .

Another point of negative rating relates to the information about the store’s sellers. According to research on retail, the requirements are partially met with his website and mobile application. In that sense Odecu’s “hidden clients” did not have access to the legal representatives of the company Paris, for example. .

The final point of concern is the lack of information regarding product inventory and availability. According to Odecu publication, Those gaps can create “out of stock” that is, there is a problem with the company’s inventory, which prevents access to customer purchase requests.

In the case of the Chilean chain Ripley, as in Paris, Non-compliance with issues related to lack of clear information to consumers Additionally, some options are not available within the same page.

“Warranty, return policy, post-purchase follow-up, technical service, and seller identification are not dropdowns on the same page (…) To access that information, you have to spend some time navigating the pages and opening several windows ‘ said the study.

In addition, the essential characteristics and benefits of our products and services, as a result of our research, Lack of information on product origin and place of manufacture In addition to the above, it also revealed zero information regarding product inventory and availability.

Far from being a retail company, Lider, a supermarket chain, and Mercado Libre, a multinational company specializing in e-commerce, were also surveyed. Their results were more or less similar.

Like Falabella, the supermarket chain founded by Walmart Chile SA fails to comply in only one section. Highest rated among all companies under study .

This section relates to the lack of information regarding product inventory and availability. This action can result in the aforementioned “out of stock”. Along with the above Rider would not have notified the customer of the cancellation of the purchase due to lack of inventory. .

Regarding the Mercado Libre company located in Latin America, the investigation revealed that it violated the rules of e-commerce regulation due to the lack of information delivered to digital channels. There is a difference between what is reported on the website and the mobile app .

Meanwhile, Odecu’s “hidden customers” revealed a common problem with purchases at Mercado Libre. No invoice sent to consumer In fact, the “hidden client” could only be accessed by persistently requesting it through a mobile application.

Odecu sent a letter to “notify” all the companies under investigation, but did not receive a response within a set period of time. “This is a clear signal on how to react to common users should be fixed as soon as possible,” said Stefan Larenas.

of National Consumer Service (Cernac) are clear about the regulations that retailers must follow. Product characteristics must be specified before purchase .

The entity “knows” the company’s contact information and requires the company to clearly specify the shipping terms for its products. All must be specified in advance to avoid product returns due to incomplete information .

The agency encourages consumers to file complaints if businesses do not comply and respond. Because this information is used by the service for control processes .

To provide free access to each complaint, National Consumer Service (Cernac) have a phone number 800700100 .